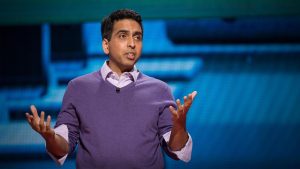 Mastery learning is an academic model very different from the way traditional classrooms are run.

Your typical math program groups kids by age rather than by knowledge or skill-level. Almost the only time this rule gets broken is when we push kids ahead of their age group, but having students skip ahead in math is highly problematic. For the most part, students move through school at a uniform pace, and get variable outcomes – different letter grades or percentiles.1 The kids who struggle to keep up might be perfectly capable of understanding the math, but because the curriculum moves too quickly, they fall behind, get confused, and often fall into the downward spiral of math avoidance.

Khan explains that, after each test, unless you got 100%, you’ve demonstrated that you’re missing some of the knowledge, but, “Even though we’ve identified the gaps, the whole class will then move on to the next subject, probably a more advanced subject that’s going to build on those gaps. It might be logarithms or negative exponents. And that process continues, and you immediately start to realize how strange this is. I didn’t know 25 percent of the more foundational thing, and now I’m being pushed to the more advanced thing. And this will continue for months, years, all the way until at some point, I might be in an algebra class or trigonometry class and I hit a wall. And it’s not because algebra is fundamentally difficult or because the student isn’t bright. It’s because I’m seeing an equation and they’re dealing with exponents and that 30 percent that I didn’t know is showing up. And then I start to disengage.”1

Each semester, everyone gets a grade, and as long as that grade is a D or higher, they move on. For example, if you finish Algebra 2 with a C because your final grade was 75%, you’ll take PreCalculus next year. The trouble with this, of course, is that PreCalc is built on Algebra 2, and you’re missing one fourth of that knowledge, not to mention what you forget over the summer. Khan demonstrates the absurdity of this system by comparing it to home building:

“So we bring in the contractor and say, ‘We were told we have two weeks to build a foundation. Do what you can.’

So they do what they can. Maybe it rains. Maybe some of the supplies don’t show up. And two weeks later, the inspector comes, looks around, says, ‘OK, the concrete is still wet right over there, that part’s not quite up to code … I’ll give it an 80 percent.’

Same thing. We have two weeks, do what you can, inspector shows up, it’s a 75 percent. Great, that’s a D-plus. Second floor, third floor, and all of a sudden, while you’re building the third floor, the whole structure collapses. And if your reaction is the reaction you typically have in education, or that a lot of folks have, you might say, maybe we had a bad contractor, or maybe we needed better inspection or more frequent inspection. But what was really broken was the process. We were artificially constraining how long we had to something, pretty much ensuring a variable outcome, and we took the trouble of inspecting and identifying those gaps, but then we built right on top of it.”1

So that’s the traditional model. Mastery learning, by contrast, would have students move forward at their own pace, only advancing after they’ve demonstrated true mastery of the content they’re working on now.1 In my view, a mastery learning curriculum would also utilize the science of learning and build in both massed practice and interleaving, employ spaced repetition, and have students produce lots of written product. Students could receive on-demand, individualized instruction as well as on-demand, individualized homework and tests.1 Khan points out that this would have been impossible or too expensive in the past, but with online resources, such as Khan Academy (the platform he created), this level of individualization is actually possible.

Still, even with great tools like Khan Academy, switching our schools over to a true mastery learning program would be very challenging. Students like to be with kids their own age, it’s expensive and time-consuming to shift curriculum in a major way, most teachers aren’t trained to run classrooms in this way, and it’s not even clear exactly how a mastery learning classroom would be run because this idea hasn’t been widely tested. I’m also hesitant to set up any academic system that relies so heavily on computer-based learning because I’ve seen so many issues with that model. Plus, a true mastery learning program would start when kids first enter the school system and follow them throughout their school career. It would we difficult to implement this mid-way through a student’s career because they’ve already accumulated many years’ worth of knowledge gaps.

With all that in mind, let’s return to those two math teachers who claimed to be running mastery learning classrooms and take a look at what they were doing.

The one thing they had in common was that homework was assigned but not graded; the only grades came from tests. From there, they diverged.

In one, each test was worth 100 points, and everyone would complete a mandatory retake of that test one week later, regardless of their score on the first test. Whatever score was higher would be counted. After that, no retakes. And in between the test and the retake? The class moved on to new content.

In the other, tests would target specific math skills, and students would be graded on each math skill individually, receiving one of four possible scores: 1, 2, 3, or 4. Only the top two scores, 3 and 4, were considered passing. In order to pass the class, students needed to earn a 3 or 4 on a majority of the topics tested. They could retest individual skills at any time by special request. They could raise a low score to a passing score by doing well on a later exam that included the old content. This seems closer to the mark, but the scoring confused students and parents alike, and I felt it was too blunt to be very meaningful.

Neither of the students I worked with from these classes was consistently learning what the teachers were teaching. They often didn’t fully understand the material, and they weren’t receiving training at school on how to use resources, such as the textbook, to figure it out. One of the teachers was available for one-on-one support, and the other was not. Neither classroom allowed students to progress at their own pace. Neither made sure you actually arrived at “I get it!” on the mastery path.

Both teachers assigned homework on a regular basis, but both assigned very short problem sets that didn’t force students to do enough practice to move along the mastery path. The problem sets were always of one type – whatever the day’s topic was – and almost never included mixed review of old topics. So students were missing out on both massed practice and interleaving.

Both classrooms acted as though succeeding with a math topic one time was good enough for mastery – once-mastered, always-mastered. But of course that’s not how memory works. If you don’t revisit old content, you’re liable to forget it. Use it or lose it. Neither seemed to have much spaced repetition built into the structure of their teaching, homework, or tests.

So neither of these teachers was really facilitating mastery learning. And, of course, traditional classrooms aren’t necessarily doing better. But, in all these cases, it’s not the teachers’ fault. Classrooms are inherently limiting. They have to teach to the average student. They have limited time and resources. They have state-mandated curriculum to get through. They have to stay on good terms with parents, students, and administrators – three groups who often have competing interests.

And even if you did manage to set up an ideal, truly mastery-driven classroom, it would be an island of excellence in a sea of mediocrity. The students who entered that classroom would carry with them all the knowledge gaps in their upside-down knowledge pyramids acquired over years of non-mastery-based learning. To truly pursue mastery, some students would need to back up very far in order to expand their math comfort zone. You might have to spend an entire year just patching all those holes and rebuilding a sense of self-efficacy.

Our classrooms can do a better job of facilitating mastery learning, and I applaud teachers for trying. But we shouldn’t expect them to transform into Sal Khan’s ideal any time soon. So, in the end, it’s up to students (and their parents) to facilitate masterly learning at home. For students, this means doing more than what is asked and using effective study techniques. It means not just practicing until you get it right, but practicing until you hardly ever get it wrong. For parents, this means providing resources, such as tutoring, textbooks, and a home study space. Parents can also lead by example by modeling their own pursuit of mastery in whatever they’re working on.