“A mother brought her young son to Mahatma Gandhi. She begged, ‘Please Mahatma. Tell my son to stop eating sugar.’ Gandhi paused, then said, ‘Bring your son back in two weeks.’ Puzzled, the woman thanked him and said she would do what he had asked. Two weeks later, she returned with her son. Gandhi looked the youngster in the eye and said, ‘Stop eating sugar.’ Grateful but bewildered, the woman asked, ‘Why did you tell me to bring him back in two weeks? You could have told him the same thing then.’ Gandhi replied, ‘Two weeks ago, I was eating sugar.’”1

The Gandhi story serves to introduce the importance of parental consistency. Your actions should match your words. Why?

Your words will automatically carry more weight when they are consistent with your actions. They will be more believable. If you really believe in the advice that you give your children, you’ll follow that advice yourself. And when you really believe in what you’re saying, your credibility skyrockets.

On the other hand, if you don’t act in a way that is consistent with how you tell your children to behave, your behavior might drown out your message. Your children might think:

“I can’t hear what you’re saying, because your actions are too loud.”

And they’d be right. Actions speak a lot louder than words. “Do as I say, not as I do” is not an effective policy.

Actions are not just louder than words, they are hundreds of times louder.

Telling a child what to do is much less effective than silently modeling good behavior. In fact, if you’re doing everything you want your child to do, you’ll rarely have to tell them to do it. That’s because…

Humans are, for better or for worse, copycats: we tend to do what we see others doing.2 Children are especially susceptible to the influence of others’ behavior, and parental behavior is, for evolutionary reasons, especially potent.3

It’s not just your behavior that is highly contagious. Everyone else your child observes in real life or on a screen is behaviorally contagious as well, so you should be mindful of who you frequently have around your children and mindful of what you allow them to watch.

But you can’t really hope to control your child’s social environment. It’s impossible and probably unwise to insulate them from all of humanity’s bad examples. The best thing you can do is be a consistent, strong role model.

“Arguably the best answer to the ‘What can we do to help our children?’ question is to model what you would like them to become.” –Walter Mischel4

There are a handful of very important behaviors that you should strive to model for your children (if you’re not already doing so). Most items on this list will be explored in detail in future blog posts. 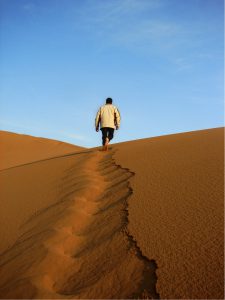 Children, and teenagers especially, are sensitive to people giving them advice. It feels like judgment–a criticism of who they are. It also feels like micromanagement–like they’re not trustworthy enough to have any freedom to behave as they choose. This is partly why parental advice so often falls on deaf ears, or worse, ears that actively reject that advice.

However, the need to give advice can very often be avoided by effective modeling. If we lead by example, and–to paraphrase Gandhi–become the change we want to see in our children, conversations about what they “should” be doing will be few and far between.

Patience is paramount because the child may not follow immediately. It’s likely that there will be a lonely period during which you walk the path on your own.

Have faith. The further you walk, the more your child will feel compelled to follow.

2 Christakis, Nicholas A., and James H. Fowler. Connected: The Surprising Power of Our Social Networks and How They Shape Our Lives — How Your Friends’ Friends’ Friends Affect Everything You Feel, Think, and Do. Back Bay Books, 2011.

4 Mischel, Walter. The Marshmallow Test: Why Self-Control Is the Engine of Success. Back Bay Books, 2015.