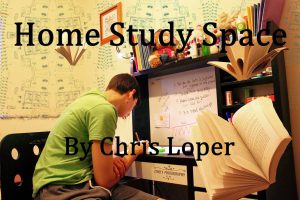 I want you to imagine something totally unheard-of: a teenager making an excuse to avoid doing his homework.

Seriously though, homework, being what it is, is something many students are inclined to avoid. And that tendency isn’t about to disappear. Homework isn’t going to suddenly become fun, and students aren’t suddenly going to prefer it over sports and video games and hanging out with friends.

Nor is it a parent’s role to convince her child to do his homework. No, the parent’s role is to facilitate the doing of homework by lowering the barriers to productivity. This means establishing a home study space. 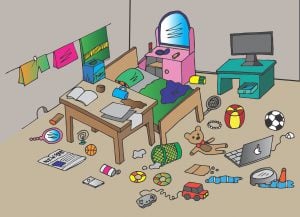 After a long day of school, he gets home tired and hungry, and he isn’t sure where to put his school stuff because there isn’t a designated location. When he thinks about doing his homework, he has to decide where to do it. At the desk in his room, which also has his computer and the temptations of the internet and video games? On the kitchen table, which is cluttered and where he’ll frequently be interrupted? On the couch in front of the TV? And tonight he has geometry transformations homework, so he needs graph paper, a sharp pencil, a straight-edge, and a compass. If those things are in the house at all, they’re probably not all in one location.

In order to get a 20 minute homework assignment done, he has to make a bunch of extra decisions, spend time tidying up a work space, and spend several minutes tracking down the materials he needs. It’s an uphill battle. For students who are exhausted or distractible, this is often too much, and the homework doesn’t get done. And for those who do get their homework done despite all these obstacles, the lack of a study space adds an unnecessary burden.

A well-organized and fully stocked study space alleviates so much of this difficulty, saving both time and frustration. This is the primary role of parents when it comes to students getting their homework done. You don’t have to track every assignment, you don’t have to monitor every moment of the work, and you don’t have to check over every question.

Doing the homework is the student’s responsibility. You just have to set him up for success.

Keeping the study space neat and tidy can become the student’s responsibility, but setting it up in the first place and stocking it with supplies is the parent’s job. A student who has never experienced a well-made study space cannot be expected to set one up himself because he has no idea what one looks like.

A common question is whether the study space should be public – in the living room, dining room, or kitchen – or private – in the student’s bedroom. The answer is … it depends.

Students who have well-developed self-regulation and a strong work ethic will generally thrive in a private study space. These tend to be older students, students without ADHD, and students who have a less-than-completely-addicted relationship with their smartphone.

At the other end of the spectrum are students who struggle to stay on task and who readily find ways to distract themselves. These tend to be younger students, students with ADHD, and students struggling with tech addiction. Such students generally benefit from accountability, even if it’s just the passive form of supervision that comes from an adult being in the same room.

Most students fall between these two extremes, so a judgement call will have to be made. But nothing needs to be set in stone, and your family can play around with the options and run little experiments to figure out what works best. Greg’s opinion is that students need to earn the privilege of a private study space by consistently demonstrating that they can be productive in a public study space.

And perhaps the best study space changes day-to-day based on what’s happening in the home. A cart on wheels 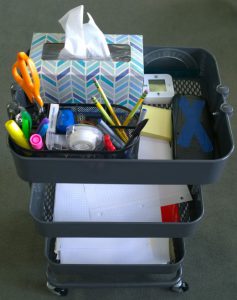 Wherever you choose to set up your home study space, the most important aspect of the space is that it is well stocked with school supplies.

Each of the desks in our office has adjacent to it a caddy stocked with scrap paper, lined paper, graph paper, sticky notes, notecards, pens, pencils, highlighters, whiteout, a big eraser, paperclips, a stapler, a compass, a ruler, and a protractor. There are also calculators, colored pencils, a 3-hole punch, and a pencil sharpener nearby, along with textbooks, computers, and a printer.

A good study space also needs to offer enough table-space to have a textbook and a notebook open at the same time. A good study space should have adequate lighting, outlets or extension cords, and chargers for laptops and tablets that get used for schoolwork. Lastly, a whiteboard or corkboard could be a nice touch.

A student who is emotionally resistant to doing the homework or a student who is overwhelmed by his enormous workload simply doesn’t need the added frustration of not having the tools he needs to do his work. Again, it’s not your job to do the work; he must walk the path himself. But if you provide a map and compass, hiking boots, trail map, and a water bottle, he’ll be much more likely to walk the path. 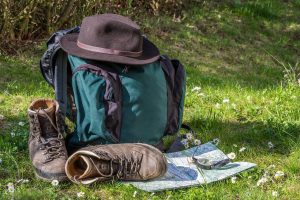 Here’s a minor horror story about not having the tools:

Last year, pretty late in the school year, two of my students revealed that they didn’t have a calculator. One was in Geometry and the other was in Algebra 1, both classes that definitely require standard calculators

at the very least, and usually call for graphing calculators

)* and the other simply didn’t have any calculator because his family had never purchased one for him.

The boys had a solution, though, which was to use the calculator on their smartphone. Both students admitted that their phones are a source of distraction, and both students have ADHD. One had even gotten in trouble with his math teacher for using his phone in class, though it’s unclear whether he was using it to text or using it as a calculator.

We want students to be active agents and request the proper tools from their parents, but we also recognize that students with underdeveloped executive function skills can’t realistically be expected to do this. It’s really up to the parents to make sure their children have the tools they need.

*Note: This is why we recommend battery-powered graphing calculator over rechargeable ones.

In his book, The Happiness Advantage: The Seven Principles of Positive Psychology That Fuel Success and Performance at Work

, Shawn Achor describes a simple life-hack that he uses to facilitate positive behavior change: The 20-Second Rule. The principle states that if you make something just 20 seconds easier to do, you’ll be more likely to do it.1

So if a student is working at his home study space, and he discovers that he’ll need a ruler for the next assignment, he’ll be much more likely to do that assignment immediately if he doesn’t have to get up and find a ruler. If all the supplies a student needs to do his homework are within arm’s reach, transitions between assignments become more efficient and start-up times get reduced.

This is one of the big reasons a well-stocked home study space makes student success more likely. Reducing the start-up time for doing the work isn’t really about saving time. 20 seconds, after all, isn’t very much time. It’s about reducing the emotional resistance to the work. The hardest part of any task we don’t feel like doing is getting started, so the easier we make it to get started, the more likely it is that we’ll do the work.

I’ve discussed The 20-Second Rule in more detail – including how it applies to quitting bad habits – on my other blog, Becoming Better. Click here to read that article.

Not sure what to buy? Here’s a downloadable supplies list that will help you set up your home study space.

1 Achor, Shawn. The Happiness Advantage: The Seven Principles of Positive Psychology That Fuel Success and Performance at Work. Crown Business, 2010.