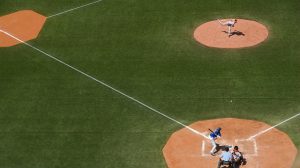 When researchers split a group of skilled baseball players into two groups and assigned both the goal of getting better at hitting curve balls, they discovered something interesting about learning in general. One group was just given batches of the same kind of pitch: a bunch of fastballs, then a bunch of changeups, and then a bunch of curveballs. The second group was given randomized pitches; they didn’t know what was coming. The result? The second group improved far more.1

This technique is called interleaving, and it applies to all sorts of learning. If you just do one type of math problem over and over again, you’ll get pretty good at it. From problem to problem, the technique you use to solve it is exactly the same. The only thing changing is the numbers. But for many students, the biggest challenge isn’t executing an algorithm to solve a problem of a known type; it’s choosing the right algorithm to solve a problem of an unknown type. On a unit test, a final exam, or a test like the SAT, there will be many problem types, and they won’t tell you what they are.

Randomizing pitches during batting practice does a much better job of mimicking a real baseball game. The pitcher doesn’t tell you what’s coming; they just throw the ball, and you have to figure it out in a fraction of a second what sort of pitch it is and whether to swing at it. So developing the ability to recognize a curveball when you didn’t know it was coming is critical.

How do you incorporate interleaving into schoolwork and studying?

It’s not always easy, but here’s one common opportunity to do it. Many math assignments cover a few different problem types, let’s say three types with eight problems each. One option is to just do the assignment in numerical order. That’s what most students do. But then you’re not getting any interleaving. Another option is to do half of each type, and then cycle back and finish the other halves. That gets you a little closer to interleaving, and builds in a little spaced repetition, which helps form memories.

A stronger option is to use Khan Academy’s quizzes and unit tests. The quizzes pull problems from the handful of recent practice sets. They pop up several times as you work through a unit on, say, quadratics. The unit tests pull problems from the entire unit. In both cases, you’re given a variety of question types in a random order, so you’re forced to remember what method is appropriate for each unique problem.

Interleaving and the Mastery Path

You can’t, however, start with interleaving. You have to first reach the “I get it” milestone on the mastery path, do a bunch more problems of the same type, and then mix it up by interleaving. If you try interleaving before solidifying an understanding, you’ll only create confusion.

The baseball players in the study were college athletes, not little-leaguers.1 They already knew how to hit a curve ball – they already “got it.” They were working through the second phase of the mastery path.

The first step to take is not interleaving but massed practice. That’s what the first group of baseball players were doing: a bunch of fastballs, then a bunch of changeups, and then a bunch of curveballs. That’s the right sort of practice to do when you’re a beginner.

In school, this looks like doing 20 or 30 math problems of the same type. Right after you learn how to factor a quadratic, that’s exactly what you need to do. You need to experience a boat-load of similar problems in order to get really comfortable with it, and you need to do it immediately. If you don’t do it, or if you blend in other problem types too soon, you’re liable to get the various methods for solving quadratics mixed up.

And even before you do a couple dozen problems of the same type, you might consider repeating the exact same problem during which you “got it.” For a complicated, multistep problem type, understanding it is hard enough. And sometimes, the understanding that was just achieved gets lost as soon as you change the numbers. It can be worthwhile to solidify that understanding and learn to flow through the steps more smoothly by simply repeating the very first problem again, as many times as it takes to feel confident with it. Your speed will increase, and the rest of the problems will be easier.

Massed practice often goes by another name: rote learning. Rote learning has become synonymous with boring, tedious, homework assignments. It’s seen as outdated. Many classrooms have done away with it completely, and don’t give massed practice as homework. Instead, homework assignments are short or exploratory or composed only of story problems where you apply the math to real-world situations. But this old-school method still has value. Most students need rote practice to even begin to internalize what they’re learning. Exploration and story problems are valuable as well, but we’re wrong to do away with massed practice.

Neither massed practice nor interleaving alone will get you to long-term memory and deep mastery. It takes both. Thus, you proceed down the mastery path by first learning the topic, then doing a bunch of repetition of that problem type, and then mixing that problem type with others as you continue to practice.