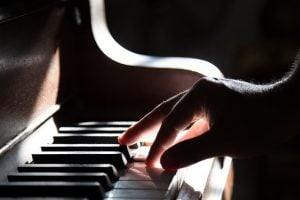 I often have the privilege of watching a student walk through the early stages of the mastery path: They’re trying to learn a new math topic, they arrive at an understanding of it, and then they do a handful of practice problems. It’s in that final stage that something really interesting happens. The more problems they do, the faster they go, and the more accurate they get. That’s not too surprising, but they also start to hesitate less, they ask fewer questions, they second-guess themselves less frequently. They become more confident.

I’m pointing this out because it runs counter to the conventional wisdom about confidence, which says that some people are confident and some people aren’t. Many people see confidence as a fixed trait that you either have or don’t have. And they see confidence as something universal, something that is consistent across all situations. Now, you might be thinking, That’s not me. I don’t think that way, but I’d like you to pause and reflect on whether or not you use phrases like, “She’s so confident.” or “I like his confidence.” This type of fixed-minded thinking is more common than you might think.

The alternative is a growth-minded view that says confidence is something you can develop, that it’s situation-dependent, and that it depends on your skill-level and experience. I can be confident at algebra but not at genetics. I’m more confident with algebra than I am with calculus because I have more experience with algebra. And I could develop more confidence with genetics or calculus through study and practice.

Similarly, the conventional wisdom about test anxiety is that it is a psychological malady. In reality, most test anxiety is caused by inadequate preparation. Students who aren’t ready for the test don’t feel particularly confident about it. They’re worried because they believe they’re going to do poorly, and they’re probably right.

Spaced repetition that moves from massed practice to interleaving is the most powerful way to form a memory,1 and it’s also a powerful way to develop confidence with a new skill. This applies to most everything we learn in school as well as to the rest of the skills we pick up in life. The more public speaking I did in my 20’s, the more confident I became as a speaker. When I spent a summer in South America, I started off nervous to speak Spanish, but by the end of the trip, I was confident enough to argue with the Chilean police about letting us use a closed road (I lost the argument but did not get arrested). It applies to remembering names. You become more and more confident that a new acquaintance’s name actually is Charles as you repeatedly say “Charles” in conversation with him and don’t get corrected.

The point is, with all things, we generally don’t feel confident at first. Confidence comes after many repetitions. And it fades over time. If you don’t use it, you’ll lose it, so recent repetitions are needed if you want to feel confident about using a skill tomorrow.

And I’m not talking about false confidence. Faking it might fool some people, but it won’t fool the most important person watching: you. True confidence comes from learning skills and practicing with them over and over again. True confidence is self-efficacy.