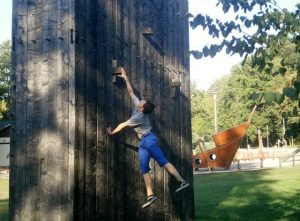 Many parents, mostly of middle-school aged students, express a desire to see their child skip a year in math. Many students share the same desire. Sometimes they see it as a way to get ahead because it will mean they can start taking college calculus while still in high school. Others want to jump up a year in math because some of their peers have, and they want to keep up with the Joneses. Some even equate being on the standard math track with being “dumb” even though it really just means you’re progressing at the normal pace.

It’s Not About Intelligence

Usually, the belief that one’s son or daughter should be allowed to skip a year in math is born out of the belief that the child is “smart” enough to do so. But this reflects a deep misunderstanding about math, intelligence, and school in general. It turns out that being smart has almost nothing to do with whether or not you should skip a year.

You could legitimately skip a year in math when you are a full year ahead in both your knowledge and your skills. This is very different from having a high IQ. One can easily have a high IQ and gain math knowledge very quickly without ever practicing math skills outside of schoolwork, leaving those skills underdeveloped. One can easily have a high IQ and have many knowledge gaps. And those gaps matter. They weaken the foundation of math’s upside down pyramid, setting the child up for difficulties in the future.

Being able to skip a year in math is something that students earn through independent study and extra practice. We often see students who believe that they are entitled to be in an advanced math class but who are completely unwilling to do this extra work.

If, as a 7th grader, you already know everything they’re going to teach in 8th grade, and you’ve practiced it all enough to have it fairly well mastered, then yes, you could jump into Algebra 1. But if you haven’t, then to skip a year would be a mistake. 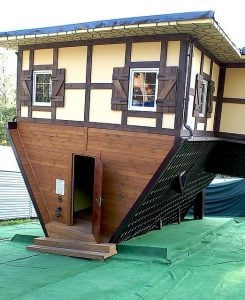 If you were building a house, would you begin construction on the first floor before laying a foundation? Or would you add the second floor before you finish framing the first floor? Of course not. But, as Khan Academy founder Sal Khan points out in this TED Talk, this is precisely what we do with math students. Math is always built on what came before. We move kids through the curriculum, year to year, whether or not they’re really ready to advance.

If you earned a 70% in this year’s math class, you get to advance. But next year, you’ll be expected to not only remember the 70% you did know – some of which you’ll forget – you’ll also be expected to know the 30% you didn’t learn this year. In other words, you get to build next year’s curriculum on top of an incomplete foundation. Likewise, a student who thinks they’re ready to skip 8th grade math but only knows 70% of the 8th grade curriculum is not ready for the jump.

Or course, in either case, the student could make good use of summer and fill in those knowledge gaps, but how many students are willing to do that?

As my rhetorical question makes clear, being “ready” to move ahead in math is about much more than just knowing the content.  It’s also about work ethic and the willingness to regularly practice math when no one is making you. Moving forward in math requires an eagerness to learn strategy and the willingness to use helpful techniques instead of taking shortcuts.

This turns out to be particularly problematic for the very group of students who are most often encouraged to skip a year. Students for whom elementary and middle school math comes easily often run into trouble in Algebra 1 because, up until now, they’ve gotten away with doing problems in their heads. They’ve never learned to engage with pencil-and-paper techniques that reduce cognitive load, so when the math demands that they show their work, they often get stuck, or they make so many mistakes that they get frustrated and start to dislike math.

Furthermore, students for whom math comes easily at a young age are often disinclined to practice. They’ve been told they’re smart, and one way to prove they’re smart is to succeed without hard work. Discovering that they actually need to put in some work to succeed in math is such an unpleasant wake-up call for these students that many ignore it. Every student who has breezed through math with ease will eventually hit the wall. It might not happen during Algebra 1, or even during high school, but it will happen. 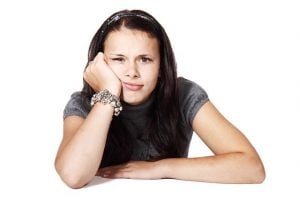 Boredom is often a reason folks think skipping a year in math is a good idea. The student reports being bored in math class, and this is taken to mean that the class is too easy for him. And although this does sometimes happen, it’s actually very rare.

Let’s assume the class is being taught at grade level and at a pace that is reasonably challenging for the average student. For a student to be academically bored by such a class, he would have to be cognitively far ahead of his peers and already know the content being taught.

Far more common is that the “boredom” is really a normal and natural aversion to paying attention to lectures, taking notes, and doing homework. Math homework that forms strong memories and strong skills generally involves tedious, repetitive problem solving. Math will, for most students, always seem boring compared to video games, television, playing with friends, and sports. Nobody ever said the mastery path would be thrilling every step of the way.

The flip side of jumping ahead is retaking a year in math.

We allow students to “pass” and move forward in math if they earn a 60% or higher. But, as I pointed out earlier, if you learned less than 70% of the material, you’re probably going to have a hard time next year. Sadly, our system is set up such that many students get sent forward when they’re not ready. And, though they may survive whatever comes next year, they won’t feel very good about it. Year after year, they fall further and further behind, and math becomes more and more unpleasant. These students are the ones most likely to fall into the downward spiral of math avoidance.

And that’s a shame. If we allowed more students to proceed through math slowly, making sure that they build mastery at each level before moving on, I think a great many more students would feel capable of pursuing careers in fields that require math. Instead, we rush students through, always moving forward and making it shameful to be “held back,” even though, sometimes, the wiser choice is repeating a class.

And what if your child skipped a year back in middle school and is now struggling as a sophomore? Few people consider this, but it can be a good choice to drop back to grade level by repeating a class.

When a student repeats a year in math, either by requirement or by choice, the family is wading into tricky emotional waters. It is essential that parents use growth-mindset language, expressing certainty about the student’s potential for growth, praising effort and strategy, and avoiding comparing the student to his peers. If you’re in this position, Greg would love to discuss how best to navigate these waters.

One way to frame this conversation is to consider the distinction between “can” and “should.” Just because you can move ahead doesn’t mean you should. Just because a teacher is allowing or even encouraging it doesn’t mean it’s a good idea. You can move forward with a D or a C in a math class, but you should consider retaking the class, even though you technically don’t have to.

Choosing not to skip ahead in math or repeating a class might feel like a setback or a loss this year, but it’s likely to be a win in the long run. If the goal is merely to look smart now, then by all means, skip ahead. But if the goal is long-term success, take it slow.