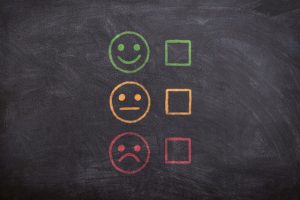 Here’s a surprisingly common conversation we have with students while looking at their grades:

Coach: “What happened there?” (pointing to a low grade)

Student: “I don’t know! I thought I did well on that, but the teacher gave me a D!”

Coach: “Hmmm… Did you ask the teacher why you were given that grade?”

At this point, the student usually says, “I should ask,” to which I reply “Well, you could ask.” The difference is subtle. The student is immediately jumping to the conclusion that she should judge herself for not asking, as though asking the teacher for better feedback was a moral obligation.

Asking for better feedback is just an option that the student has. If she chooses not to ask, fine. She’ll simply be missing out on some information that she might find useful.

If you don’t ask, you’ll never know. And if you don’t know what went wrong, you probably won’t do better next time.

Grades are a form of feedback, but a really unhelpful one. If the feedback for a complicated, multipart assignment is just given as a single letter, percent, or number of points, very little can be learned.

To be fair, big assignments, essays, and projects are often graded using a multipart rubric. This is better because the feedback is more specific, but even these are usually still inadequate. Rubrics can be vague or full of confusing language. And often students don’t understand why they’ve received the marks they have for each of the rubric’s categories. This is not to fault teachers. They are overworked and underpaid, and grading is a tedious, time-consuming task. So it would be unrealistic and unfair to expect all your teachers to just start offering up detailed feedback on every assignment.

But when you really want to know, you can ask. Don’t sit and wonder why you got a lower grade than you thought you deserved. Don’t expect to learn from vague and inadequate feedback. Patiently and politely ask for detailed feedback. What did I do wrong? What was I missing? Where did the quality of my work fall short? How can I do better in the future? If you’re really interested in the pursuit of mastery, you can even ask these questions when you do very well.

But mostly, you’ll ask when you’re surprised by a low grade. This is an important part of playing the game of school. If the grade that surprised you was a type of assignment that’s going to keep coming up, such as a lab report, it’s critical that you sort out what the teacher’s expectations are early in the school year. If you don’t, you’ll probably earn similarly low grades for the rest of the course.

How you ask matters.

Be careful about how you approach asking for better feedback. The most important thing is your tone of voice.

If you ask, “Why did I get this grade?!” with an argumentative tone, it will be clear that you’re not really interested in learning. If you’re there to challenge the teacher and demand a higher grade, then you’re walking in with the assumption that you’re right and that you’ve been wronged. Conversations that start this way typically go nowhere.

Instead, try to come off as genuinely curious. Make it clear that you’d like to learn how to do better next time. Operate from the assumption, which will turn out to be correct most of the time, that you actually did screw up in some way. It is possible that the teacher messed up in grading your work, but really, what do you think is more common – that teachers make mistakes in grading, or that students make mistakes in following the instructions?

Oh, and try to avoid wasting the teacher’s time. First, recheck the instructions yourself and make sure you didn’t miss anything. If there’s a rubric, recheck that too. And if you still can’t figure out why you earned the grade you did, it could be time to ask for better feedback.

So let’s say you’ve asked politely, and you think you’ve understood the feedback. You’re now ready to do better next time. But you actually don’t have to wait until next time to act on this feedback. You can put it into action immediately, by fixing whatever was wrong with the already-graded assignment.

But let me be clear: You’re not doing this to earn extra points. The grade is done. You’re just doing it for practice. You can also take the corrected assignment to the teacher for follow-up feedback. This would confirm whether or not you did, in fact, understand the feedback.

Lastly, a Warning For Parents

Please, please, please don’t ask on your child’s behalf. It’s important for children to be in charge of their own success. Empower your child to be an active agent by getting out of the way. She needs to practice recognizing that asking would be helpful, choosing to do it, and then following through on whatever feedback she receives. Resist the urge to rescue, and let her own the process of asking if she decides to go down that road. And when she expresses frustration over a grade, the only thing you might offer is the reminder that she could ask.