Note: My deepest gratitude goes out to Tal Ben-Shahar, former professor of positive psychology at Harvard for teaching this concept. I highly recommend his website and books:
Being Happy: You Don’t Have to Be Perfect to Lead a Richer, Happier Life

Happier: Learn the Secrets to Daily Joy and Lasting Fulfillment

Even Happier: A Gratitude Journal for Daily Joy and Lasting Fulfillment

The Pursuit of Perfect: How to Stop Chasing Perfection and Start Living a Richer, Happier Life

Choose the Life You Want: The Mindful Way to Happiness

But there is one role that we should always be playing: the role of active agent.

An “active agent” is someone who believes she can improve her life by taking action.1 She knows she cannot control all of the variables in her life, but she knows that there is one variable that is always under her control: her own behavior. In other words, an active agent has an internal locus of control.

“I don’t control life, but I can control how I react to it.” –Macklemore2

The Importance of Agency

This distinction is profoundly important for health, happiness, and success. Which role you identify more strongly with has a pervasive influence on all areas of your life. 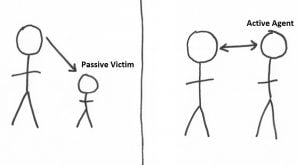 Successful students universally have an active-agent mindset. They place themselves in the driver’s seat of their own education. Although our work with students often revolves around surface-level concerns such as solving math problems and conjugating verbs, we are also steadily trying to instill a sense of agency in our students.

Helping a student who is in a passive-victim mindset to shift toward an active-agent mindset is just as fundamental as helping a student with a fixed mindset shift toward a growth mindset. In fact, the two sets of attitudes are interconnected: If you have a growth mindset, you’re much more likely to be an active agent. And the fixed mindset could even be understood as a specific version of the passive-victim mentality since many fixed-minded students believe they are victims of bad genes.3

No student should see herself as a victim of bad genes, a bad textbook, or a bad teacher, even though these things do exist and do matter. You can be an actual victim of wrongdoing without passively accepting your fate.  Being an active agent means taking whatever action you can to improve your situation, regardless of whose fault it is and regardless of how much difficulty you’re facing.  When things don’t go well, you ask yourself proactive questions and then get to work.

“Things don’t always happen for the best, but we can always make the best of the things that happen.” –Tal Ben-Shahar1

Many people find it helpful to learn from examples of people like Nelson Mandela and Viktor Frankl because they remained active agents in the face of enormous difficulties. Mandela spent decades in prison while struggling against Apartheid in South Africa, and Frankl became a spiritual leader and a model of resilience for his fellow concentration camp inmates during the Holocaust.1 These men did not pretend that their awful situation was really pleasant, nor did they wallow in despair; they chose to make the best of their reality.

However, there is a sense in which active agents are realistic optimists. Because they believe that they can succeed, active agents take enough action to prove themselves right. The result is that the optimism of an active agent is often a self-fulfilling prophecy.1 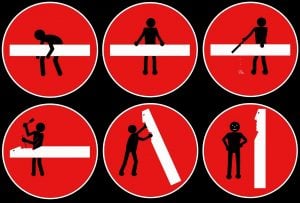 Students who are active agents approach challenging academic content with the assumption that they can figure it out, and then they work hard enough to succeed at figuring it out. They also assume that there are resources available that could help them figure it out, and, because they seek out these resources, they wind up proving themselves right.

Active-agent students also recognize that challenges and difficulties are inevitable. They plan to encounter obstacles along the mastery path, and so they take steps to prepare for them. Part of being an active agent in the present is planning to be one in the future.

“You’re in charge of your own learning.” –Greg Smith

That is one of the most important messages a student can hear. When students have a sense of ownership, they take more action. As a result, their grades are higher, they learn more, and they develop more powerful skills for life.

2 Macklemore and Ryan Lewis, paraphrased lyric from “Vipasanna.” The VS. Redux. 2010.