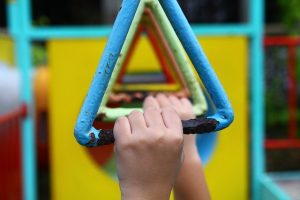 When I was a child, I took great pride in my ability to skip bars when swinging across the monkey bars. Skipping one bar was an important milestone, but skipping two bars made me feel really special. I even got to a place where I could skip three. I did it because it was faster, because it was a challenge, and also because I was trying to show off. I thought that it proved I was “talented” and “athletic.” In reality, I developed this ability through frequent practice: Monkey bars was the main activity I did at recess.

Later I skipped steps as I bounded up and down the stairs, both because it was faster and because I could. I wanted to be tall and strong, and I wanted to show the world that I was those things. I might have also been a wee bit impatient. I was lucky to never fall off the monkey bars, but my older brother Nick, who also liked to skip bars, once fell and broke his arm. I did, however, fall down the stairs a few times, spraining my ankle each time.

Things were no different in the classroom. As a student, I took pride in skipping steps when solving math problems. I also preferred to skip the key steps of taking notes in class and doing practice problems. I thought that the fact that I could do well in math while skipping these steps proved I was smart. When math got tough, I was caught off-guard. I did very poorly in my first math class in college.

For most of my life, I had overly dependent self-esteem. This means that my sense of self-worth was derived from praise, good grades, and comparing well to my peers. As a result, I was eager to look smart; I skipped steps in order to prove that I was smart enough to skip. If you had to work hard, I believed, that meant you weren’t gifted.

This misguided way of thinking was coupled with a fixed mindset: I was certain that talent and intelligence were unchangeable, set in stone by genetics. Thus, it was very important to prove to myself that I was gifted because I “knew” that if you weren’t, you could never improve.

It was not until my late 20’s that I learned about the growth mindset and independent self-esteem and realized how problematic my mindsets were. Since then, I’ve tried to compare myself less and less to other people, instead comparing how I am today with how I was yesterday, last week, and last year. Now, rather than trying to prove that I’m already good enough, I’m working hard on the process of becoming better.

When to Skip and What it Means

Skipping steps isn’t always a bad thing. On the monkey bars, it was a legitimate, albeit risky, athletic challenge. While I almost always encourage students to show all their work on paper when doing math problems because it lightens their cognitive load, I sometimes choose to challenge myself to skip steps or do mental math, not because I want to show off, but because I want the challenge.

What I’ve realized is that the ability to skip steps doesn’t really demonstrate intelligence or talent – it demonstrates a high level of skill development. It shows a trained ability. So skipping steps can be a way to see how well developed your skills are. It can be a version of doing it the hard way, if the goal is to challenge yourself and see how far you’ve come. For example, I’ve done so much public speaking that I sometimes give talks just using a vague outline, rather than a fully written speech, which is something I could not have done three years ago.

But we need to keep in mind that skipping steps is always risky. It isn’t the way to learn new content or navigate content we’re struggling with, and we shouldn’t skip steps in high-stakes situations like tests.

The desire for shortcuts is widespread.

Many people want a successful business, but don’t want to do the hard work or experience the failures of true entrepreneurship. Isn’t there a get-rich-quick scheme I could use?

Many people want the glory of an athletic victory, but don’t want to put in the hours of daily practice that are required to become a champion. Can’t I just find the sport where I’m so naturally gifted that I don’t have to practice?

Many people want to lose weight, but don’t want to exercise or practice the steady discipline of healthy eating. Isn’t there a magic pill I can take?

Many parent want to see their children develop executive function, but don’t want to give them space to try things on their own and potentially fail. Can’t someone just fix my child?

None of this is to judge. I’m as guilty of this sort of thinking anyone. The best solution I’ve found is to choose a process-based identity, where I focus on consistent effort rather than immediate results, and then steadily engage in practices that reinforce that identity. I find that it helps to take my eyes off of the prize and keep my eyes on the process.