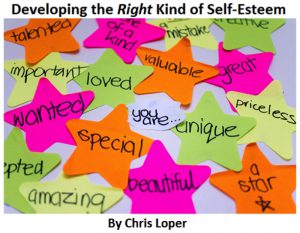 Nearly all parents want their children to have high self-esteem. It’s widely believed that having high self-esteem leads to greater levels of success in both school and life, and there is some truth to that.1 Unfortunately, it’s a concept that has been widely misunderstood, and, as a result, the way many parents and educators try to increase self-esteem in children often backfires.1

Self-esteem, it turns out, is one of those ideas that we treat as being far simpler than it actually is. As mentioned in the latter half of a previous post, it’s often conflated with a different concept: self-efficacy. Click here if you want to learn more about self-efficacy. Right now, I want to spend a few minutes discussing an insight – not my own – that revolutionized my understanding of self-esteem.

First, there is a distinction between healthy, reality-based self-esteem and unhealthy, falsehood-based self-esteem.2 It’s important for people to have an accurate sense of their own abilities and an accurate sense of how the world reacts to them.2 We want children to feel good about themselves, but it’s important that they feel good about themselves for good reasons.2

Accurate feedback is paramount.2 When we exaggerate criticism and blow things out of proportion, we often needlessly create low self-esteem.2 When we heap on undeserved praise, we often create artificially high self-esteem.2 Both extremes are problematic. Realism is the foundation of healthy self-esteem.2

It’s also possible that if we heap on undeserved praise or exaggerated criticism, the child may recognize that the feedback is inaccurate. If that occurs, then the child will stop trusting your feedback. He may begin to ignore your criticisms, whether grounded in reality or not, and he may decide not to believe your praise, even when it is genuine.2 The child who becomes excessively skeptical in this way loses countless opportunities to receive valuable information about his behavior.

Second, there is a critical distinction between process-based praise and character-based praise.

It seems harmless or even good to praise children for being “smart” or “athletic” or “talented,” but such praise is actually detrimental. These personal qualities feel like permanent character traits that one either has or does not have. Since this sort of praise sends the message that success results from having these traits, children who receive character-based praise come to learn that success is not within their control, and this cultivates an unhealthy type of self-esteem.

On the other hand, if children are praised for the way they choose to act–their strategies and the number of times they try–then children develop a much healthier type of self-esteem. Process-based praise teaches children that success is under their direct control and that they can improve their outcomes by making different choices.

Furthermore, research has shown that praising effort and technique rather than intelligence and talent leads to the development of a growth mindset, which has a wide range of important benefits.3

With those two concepts out of the way, we can now turn to the main idea.

However, this is not a black and white distinction. Everyone’s self-esteem is composed of both types.1 This is normal and healthy.1 Your sense of self-worth should not be entirely dependent on the judgments of others, nor should you completely ignore how the world reacts to you.1 However, it is a much more common problem to have overly-dependent self-esteem.1

Odds are, you should strive to make your own self-concept more independent, and you should try to cultivate greater independent self-esteem in your children.

Let’s compare the two from a few different angles to see what I mean.

How do I look? vs Am I improving?

Dependent self-esteem is based on comparisons with other people. It manifests as a desire to be better than others. A classic example of someone with severely dependent self-esteem is the Evil Queen from Disney’s Snow White and the Seven Dwarves. She had to repeatedly ask her magic mirror for approval, and when she didn’t get it, she became furious.

The Evil Queen wasn’t happy about how she compared to Snow White: 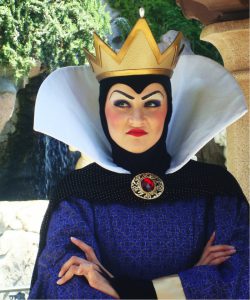 By contrast, independent self-esteem is based on comparisons with past performance.To see how this plays out, let’s use the sport of running as an example.

Ironically, a person who focuses on improving will do much better in the long run. Since he doesn’t care about winning, he’ll happily practice with superior competitors. They’ll beat him, of course, but he’ll learn something from each of them. They’ll push him to new heights. The athlete who focuses on winning will choose to practice with inferior competitors so that he can feel superior to them. His practices will be easy, but he’ll learn nothing.

For example, a student with dependent self-esteem will avoid taking AP, IB, or honors classes because such classes are difficult, he might do poorly in them, and as such, they present a risk. He’d rather be a big fish in a small pond.

Meanwhile, a student with independent self-esteem will choose to take challenging classes precisely because they are hard. He’s interested in growing as a student, and he knows that difficult classes are the best way to do that. He understands that he will probably struggle in these classes, and that he may receive lower grades as a result, but he’s more concerned with learning than grades. He is comfortable being a small fish in a big pond.

What do you think of me? vs What do I think of myself?

For example, if a person with dependent self-esteem receives praise, he’ll assume that it means his work is done–no further improvement necessary. The praise makes him feel good about himself, but only for a short time. His self-image will begin to dip if he doesn’t soon receive more compliments or congratulations. He must be told that he’s good enough by other people in order to approve of himself.1

If such a person is criticized, he will likely feel devastated and deflated.1 The criticism of others is a clear indication that he’s simply not good enough.1 Because he believes he’s a finished product–because he has a fixed mindset–he mistakenly believes that he’ll never be good enough.3 As a result, he won’t use the criticism to learn how he can improve.3 He may even get defensive and reject the validity of the critique.1

Thus, a person with dependent self-esteem will make every effort to present the world with a polished version of himself.1 He’ll highlight his strengths, hide his weaknesses, show off his victories, and make excuses about his shortcomings, all in an effort to protect his delicate ego.1

A person with independent self-esteem, by contrast, will see praise as only a minor event. It may make him feel good, but not nearly as good as the praise he gives himself. He doesn’t need more compliments and congratulations because he already knows that he’s good enough. He gives himself praise; he gives himself approval.1

A person with independent self-esteem will be emotionally unscathed by criticism. Because he approves of himself, the disapproval of others isn’t devastating.1 He knows he’s not a finished product, so he’ll use the criticism as valuable feedback–helpful information about how to improve.3

Less worried about the opinions of others, he’ll present himself honestly to the world.1 He’ll understand that this is the best way to get accurate feedback–the very sort of feedback that will help him improve the most.1 He won’t feel a need to brag and show off, nor will he feel a need to hide his flaws or make excuses for his shortcomings.1

Building independent self-esteem means doing things that you approve of, that you know are right, whether or not anyone ever finds out about them. Probably the most foolproof way to do this is to give to charity and never tell anyone about it. Second best might be volunteering somewhere where no one knows you, and never telling anyone about it. If we tell our friends and family about the good we’ve done, we’re communicating to ourselves that we actually didn’t do it because it’s right; rather, we did it in order to get praise and approval from other people. But if we keep it to ourselves, then we’ve truly done it for our own approval and for the good it will bring to the world.

Mistakes and failures are another form of feedback, and responses to these fit the same pattern.

People with dependent self-esteem are afraid of making mistakes and terrified of failing because they see these events as signs that they are inadequate, incapable, or just plain bad.1 Since they don’t think they can improve, they don’t learn from their errors.3

Not surprisingly, students with dependent self-esteem tend to avoid academic challenges so that they can avoid failure. Likewise, they don’t like answering questions unless they’re sure of an answer, because they don’t want to be wrong.

Responding very differently, people with independent self-esteem treat mistakes and failures as learning opportunities.1 They see errors and struggles as signs that they need to work harder and use more effective strategies.3 They learn from their mistakes and bounce back from failures stronger than before.3

Students with independent self-esteem are eager for academic challenges and are willing to make educated guesses. They’re okay with trying and failing; they’re okay with getting questions wrong.

Because a person with dependent self-esteem is constantly comparing himself to others, hoping to discover that he’s better than them, he’ll feel threatened by people who are more successful.1 He sees high-achieving individuals as direct competition.1 Their high status lowers his status.1 Their success makes him look bad by comparison.1

So, rather than using these individuals as role models to emulate, he’ll concoct reasons to discount their success. Perhaps they’ve had unfair advantages, perhaps they’re talented or gifted in some special way, or perhaps they’re just lucky. They couldn’t have possibly earned their success. He’ll ignore their methods, resist learning their strategies, and pretend that they didn’t get where they are through hard work.

A person with dependent self-esteem struggles with being a beginner. He’d like to go from zero-to-hero and never deal with the difficulties that lie on the path of improvement. Since he believes he is a finished product, it’s hard for him to imagine improving at all.

By contrast, since a person with independent self-esteem primarily compares himself to his past-self, he’s at ease with people who are more successful.1 Their high levels of achievement are no threat to him because he’s not in competition with them.1

As a result, he’ll use these individuals as role models, copying their methods, adopting their strategies, and mimicking their work-ethic.1 He understands that they’ve earned their success and that he can, too. He gives himself permission to be a beginner because he knows he’s a work in progress.

We Can Do It

It should now be clear that not all self-esteem is created equal. When most of a person’s self-esteem is derived from external sources, it is unstable and unhelpful. Most people need to derive more of their self-esteem from within. Independent self-esteem leads to greater happiness as well as greater success.

We can all take the steps outlined here to begin shifting our own self-esteem towards greater independence, and we can all be more mindful of how to help today’s children develop the right type of self-esteem.

Click here to read the latest from the College Board on 2021 AP Tests.

Click here to watch a short video summarizing important information about the online version of the AP Tests.