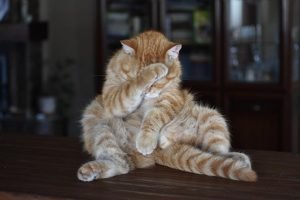 Failure is never fun, but it doesn’t have to be a source of shame. If you fail at something, it doesn’t make you a failure; it’s an event, not an identity. And we all fail, so why not give yourself permission to be human?

In Everything Is Figureoutable, Marie Forleo offers a lovely way of redefining failure:

So when we fail, we can understand that it just means we were attempting to grow. Growth is often a struggle, and that struggle often involves failure, but it’s worth it. Remember, struggle makes you stronger.

As I’ve said before, mistakes and failures are learning opportunities – they’re actually good. That doesn’t mean they feel good, but if we understand their value, then we can feel a little better about them. Learning requires risk, and sometimes learning hurts (and not just when you fall off your bike).

So move forward with both humility and confidence: the humility to know you’ll sometimes fail and the confidence to know that you’ll eventually figure it out.

Don’t avoid failure and don’t fear it. When you inevitably do fail, don’t be ashamed. Instead, heed the wisdom of Samuel Beckett:

1 Forleo, Marie. Everything Is Figureoutable. Porfolio, 2019.