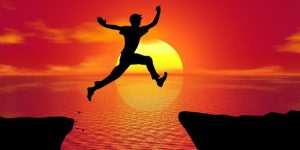 Researchers at Johns Hopkins set out to uncover the role of guessing in learning. Do people learn by taking risks and making mistakes? Does the memory of past errors improve future performance?

Here’s what they found:

“Using a deceptively simple set of experiments, researchers have learned why people learn an identical or similar task faster the second, third and subsequent time around. The reason: They are aided not only by memories of how to perform the task, but also by memories of the errors made the first time.”1 During the first attempts, the learners made some guesses that were incorrect – “prediction errors” – which were very helpful to their success in future attempts.1

So does learning require taking risks? It appears the answer is yes.

“The surprise finding in the current study … is that not only do such errors train the brain to better perform a specific task, but they also teach it how to learn faster from errors, even when those errors are encountered in a completely different task. In this way, the brain can generalize from one task to another by keeping a memory of the errors.”1

Now, this research was focused on learning motor tasks – tasks of physical coordination – but I think there’s good reason to believe it applies to all types of learning. Think of the way toddlers learn to talk. Do they wait until they’re sure they have the grammar and pronunciation all figured out? No. They just go for it. They take risks, make mistakes, and learn from them.

“Learn to fail or fail to learn.” –Tal Ben-Shahar

When you’re unsure how to do something – whether that’s swinging a tennis racquet, solving a math problem, or spelling a word correctly – you’ll learn most quickly by taking the risk of going for it. If you mess up, the discomfort of making an error will help convince your brain to care enough to figure it out and remember it. This is the power of mistakes and failures, and it’s a power we can only tap into if we take risks.

To be clear, I’m not talking about risky behaviors like extreme sports or reckless driving. I’m talking about academic risks that are necessary for learning and growth.

I’m also not talking about the risk of contracting or spreading Covid-19 by sending kids back to school before we have this pandemic under control.

Risk-Aversion is a Big Problem

For as long as there have been perfectionists among us, students have struggled with risk-aversion. But there are two reasons why this issue may be on the rise.

In the not-too-distant past, if someone had a question, such as “How do you tell the difference between a juvenile woodpecker and an adult woodpecker?” they had to sit with uncertainty for a while. In a group setting, you would discuss the question. People would make guesses and debate the merits of those guesses. Perhaps days later, someone with access to an encyclopedia or a bird expert would return with the answer.

Now, we just Google it. Instant answer, no need to guess. And more critically, no need to take a risk in voicing our guess. And while it’s nice to learn the truth, we’re losing the ability to tolerate uncertainty. And we’re becoming less and less comfortable taking intellectual risks by guessing. Anyone with a smartphone can prove us wrong in a few seconds, so we play it safe in order to avoid looking stupid.

The other reason risk-aversion may be on the rise was noted by Dr. Martin Seligman (the founder of positive psychology): “In a society in which individualism is becoming rampant, people more and more believe that they are the center of the world. Such a belief system makes individual failure almost inconsolable.”2 In other words, we’re afraid of risking failure because we live in an increasingly individualistic culture.

Too many kids grow up terrified of failing at anything, large or small. They ought to be told that the path to mastery is walked by making mistakes and that the road to success is lined with failures. Failure isn’t just okay, it’s mandatory.

We can and should actively encourage students to “go for it!” when they’re hesitant. As a tutor, I do this all the time.

A student might be staring at a math problem, frozen, or they might be hesitating to write a thesis statement for their essay. “Give it your best shot,” I encourage.

“But I don’t know how!” comes the reply.

“Yeah, but go for it anyway. It’s okay if it doesn’t go well. I’ll help you work through it after you try.”

Quite often, they actually do know, and they wind up surprising themselves by getting it right. The issue was not a lack of knowledge, but a lack of confidence. The experience of taking a risk and succeeding does far more for building self-efficacy than having a tutor hold your hand through every step.

And if they do get it wrong, the experience is just as important. Mistakes, though painful, make for great learning moments. And the pain is never as bad as they imagine. When you go for it, screw up, and realize afterward that you’re still alive and well, you prove to yourself that taking academic risks is safe. I can’t tell you it’s safe; you have to feel it.

And this small-scale risk-taking is good practice for things in life that are more important than math problems and thesis statements. You can’t write a book, perform scientific research, or start a business if you’re unwilling to take risks. Sure, failing at these endeavors may hurt, but the pain of failure is just one side of this coin. On the other side – the inaction side – there is the pain of regret.

“Most failures are one-time costs. Most regrets are recurring costs. The pain of inaction stings longer than the pain of incorrect action.” –James Clear

One of the many benefits of playing games is that they teach us to take risks, make mistakes, and deal with failures. Games require experimentation, guessing what others are thinking, and taking actions in the face of uncertainty. And since the worst thing that can happen is losing the game, it’s a great training ground for risk-taking.

Shoot, there is even a game called Risk, though I don’t recommend it. (Here are some games I do recommend.)

And if you’re a fan of sports analogies, well, there are plenty. My brother had a baseball t-shirt that said, “You’ll never steal second with your foot on first.” Or there’s the Wayne Gretzky classic, “You miss 100% of the shots you don’t take.”

As usual, the most powerful thing parents can do here is to lead by example.

On that note, I want to leave you with this gem from Brené Brown’s book, Daring Greatly:

“In terms of teaching our children to dare greatly… the question isn’t so much ‘Are you parenting the right way?’ as it is: ‘Are you the adult that you want your child to grow up to be?’

2 Seligman, Martin. Learned Optimism: How to Change Your Mind and Your Life. Vintage; Reprint edition, 2006.