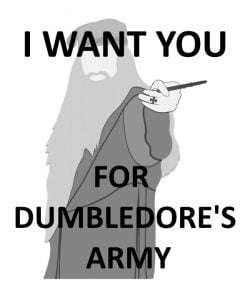 It’s year five for Harry Potter and his friends at Hogwarts. Voldemort has returned, but The Ministry of Magic refuses to believe it. Deep in denial, the Ministry has imposed a curriculum upon the students that will fail to prepare them for the dangers of the real world. They won’t be properly trained to defend themselves against Voldemort and his Death Eaters. The Ministry has sent its own agent, Dolores Umbridge, to administer this inadequate curriculum as the school’s new professor of Defense Against the Dark Arts. 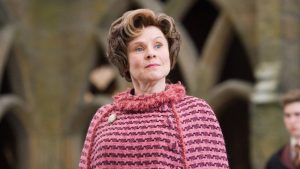 Umbridge is awful, both academically and personally. She abides by the Ministry’s denial of the truth and uses torture to punish those who dare challenge her. She’s excessively strict and authoritarian, and she goes out of her way to humiliate other people. But, of course, I’m more interested in how she is a bad teacher than in how she is a bad person. And, in particular, I’m interested in how some of the students respond to her failings as a teacher by taking matters into their own hands.

Defense Against the Dark Arts is a course in which students would traditionally learn spells and practice casting them. This makes it rather similar to a math class. In math, reading about how to solve problems isn’t enough; you have to actually practice solving the problems yourself. Likewise, young witches and wizards need to practice casting defensive spells in order to master them.

But Dolores Umbridge doesn’t allow students to practice casting spells. She insists that they don’t need to – that they can learn everything they need by just reading about defensive spells. Essentially, she modeled her class around a theory of “passive studying” rather than “active studying.” Passive studying doesn’t work because it fails to convince your brain to care. If you want to remember what you’re learning, you have to be an active participant. You have to practice.

So a group of students, organized by Hermione and led by Harry, decide they’re going to practice anyway. They form a club and begin meeting regularly to get in some much needed spell practice. They call themselves “Dumbledore’s Army.” 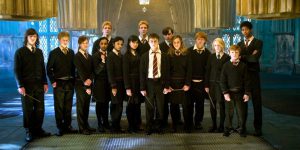 Instead of relying on their teacher to provide them with what they need, they take charge of their own education. They know the system is broken, but they refuse to be passive victims. Instead, they become active agents in their own training.

In your non-wizarding school, sometimes you’ll have good teachers, and sometimes you won’t. The lesson to take from Dumbledore’s Army is that you don’t have to rely on effective teaching to learn what you need to learn. You don’t have to be a victim of an inadequate educational system. And you don’t have to wait for a teacher to tell you it’s time to practice. You, like Harry and his friends, are response-able, even in the worst classrooms.

The Room of Requirement

The students in Harry Potter and the Order of the Phoenix are not provided with the resources they need. They don’t have a practice space or good spellbooks. Eventually, they find what they need in The Room of Requirement – a magical room that takes whatever form you most desperately need.

As a student, what is your “room of requirement?”

I can think of two potential answers to that question.

The other potential answer is the internet. But, recall that The Room of Requirement only appears when people focus on what exactly they need and ask for it. Likewise, Google will fail to give you what you need if you can’t tell it exactly what you need. And if you’re unfocused, the internet won’t help you.

And remember, among the useful things Dumbledore’s Army finds inside The Room of Requirement are textbooks filled with defensive spells. Sometimes using the internet to purchase a used textbook is really the best move. Here are some of our recommended textbooks.

Take it upon yourself to do well, study how you need to study, learn what you need to learn. Be resourceful and resilient like the members of Dumbledore’s Army. You can hate the system, hate the curriculum, even hate your teacher, and do well anyway. After all, Harry earned an “Outstanding” on his Defense Against the Dark Arts O.W.L. exam despite having Dolores Umbridge for a teacher.