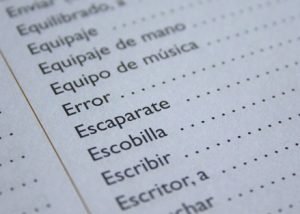 These days, the most popular way to study vocab is Quizlet, which is a repository of digital flashcards.

Quizlet is popular because it’s easy. Usually, someone else has already made the flashcards for you – either your teacher, a classmate, or some random person on the internet (whom you hope is reliable).

Unfortunately, studying the “easy” way is not a good recipe for learning. By using someone else’s flashcards, you’re missing out on a critical step in learning vocabulary – the step where you write it down yourself. Thus, you’re failing to tap into the power of written product.

Furthermore, the act of using Quizlet’s flashcards is often very passive. It involves a lot of looking at your phone and swiping the screen. The trouble with that version of “studying” is that it’s way too similar to all the other looking and swiping students do with their phones. It doesn’t stand out, so it doesn’t convince the brain to care.

On the other hand, you could take out a piece of paper or a stack of blank notecards and spend 20 minutes writing out the vocab yourself. That would stand out to your brain, and that would put you on the path to rapid memory formation.

Here are two excellent, time-tested methods for studying vocab that will get you more memory in less time. 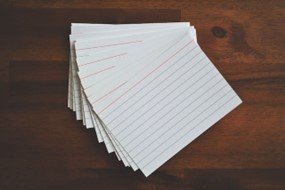 Quizlet is actually modeled after traditional paper flashcards. Once made, these are a nice way to get in little doses of studying here and there. You can shuffle them to mix up the order. You can reverse them all to switch from word –> definition to definition –> word.

But as mentioned above, the real power comes from the writing of them. Making them yourself is hard work, and it’s precisely that hard work that tells your brain this vocab is worth holding onto.

Additionally, the physical experience of flipping through paper cards is rare, as compared to swiping on your phone, so it should stand out to your brain as more significant than using Quizlet’s flashcards.

This is my preferred method for studying vocab. 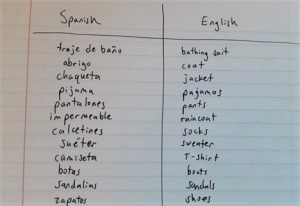 In the first round of effort, you’re just using the provided resource (which might even be a Quizlet your teacher made) to write out the two lists. As with the making of paper flashcards, this lays the groundwork for initial memory formation. (Note: Don’t write out all the Spanish words and then all the English words. Write them in corresponding pairs. Hablar | to speak, comer | to eat, and so on. You’re trying to establish a link in your brain between the vocab and its definition, so write them together.)

The two-column chart creates a powerful two-way practice test that works for any foreign language, but also for biology, language arts, history, statistics, or any other situation where you need to memorize a bunch of vocabulary.

The only drawback is that you cannot randomize the word order, as you can with flashcards. But the fact that you’ve got a ready-made, reusable, written practice test more than makes up for that. And if need be, you can always rewrite it in a different order.

No matter what method you choose, you’ll enhance your retention if you also verbalize as you study. This incorporates more senses, and it’s slightly more work, and both of those things improve memory formation.