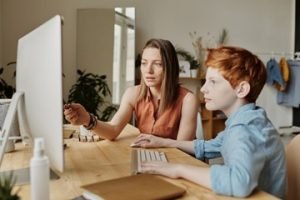 One of the timeless struggles parents face is deciding just how much support to give their children as they grow up.

When your children are very young, you have to do everything for them. And, hopefully, by the time they’re adults, they’ll be able to take care of themselves. In between, well, that’s where it gets tricky. You have to gradually pull back your support, doing less and less for them. But how much should you pull back? And how quickly?

In The 7 Habits of Highly Effective People, Stephen Covey explains the challenge parents face in terms of balancing “product” – the results we want – with “production capacity” – the ability of the child to produce those results on their own. And it’s not about choosing one or the other. As he says, “effectiveness lies in the balance … the P/PC Balance.”1

Most of the time, parents err on the side of doing too much for their children – focusing too much on the product. They’re not good at making their bed, so we do it for them. They’re not skilled at washing the dishes, so we don’t let them help. They’re not wise enough to make smart choices, so we decide everything for them. As Covey explains, it’s tempting to slip into authoritarian parenting:

When children are little, they are very dependent, very vulnerable. It becomes so easy to neglect the PC work – the training, the communicating, the relating, the listening. It’s easy to take advantage, to manipulate, to get what you want the way you want it – right now! You’re bigger, you’re smarter, and you’re right! So why not just tell them what to do? If necessary, yell at them, intimidate them, insist on your way.”1

But what about the other extreme? Would permissive parenting be better?

“Or you can indulge them. You can go for … popularity … giving them their way all the time. Then they grow up without any internal sense of standards or expectations, without a personal commitment to being disciplined or responsible.”1

Either way, you have a product mentality; you’re focused exclusively on getting good results now at the expense of future production capacity. You’re grabbing short-term benefits at the expense of long-term growth.

In between the extremes of authoritarian parenting and permissive parenting lies a better, more balanced approach: authoritative parenting.

This means holding your children to realistically high standards, rather than astronomically high standards or no standards at all. It means providing support and guidance without doing everything for them. And it means patiently cultivating production capacity, even if that means getting a poorer outcome today.

In the realm of executive function, this is often referred to as “scaffolding.” When a building is under construction, the builders put up scaffolding – a temporary structure that supports the construction process. Scaffolding never attempts to take the place of the building itself or perform the building’s functions for it; it just helps. And as the building becomes closer and closer to completion, the scaffolding is steadily removed.

The Discomfort of Letting Go

If you’re doing scaffolding right, you’ll probably feel uncomfortable. Most of the time, we have to stop doing things for our children before they’re ready to do them on their own. The training wheels come off before they really learn how to ride, not after. Letting go in this way is very uncomfortable because we can see that they’re not ready, and that they’re probably going to fail.

But if we’re wise, we can remember that they will learn from these failures, and they’ll get stronger through the act of struggling to do things on their own. And it is precisely this learning and this strength-building that sets them up to succeed later in life.

So listen to this discomfort. It doesn’t mean you’re making a mistake; it means that you’re going in the right direction. Like most forms of psychological resistance, it is a compass, not a warning.