I am pleased to introduce a guest writer, my father, Levi Smith, Jr. I asked him to provide a little historical perspective on a set of books in our office that mean a great deal to me. Levi is a retired lawyer living in Portland. 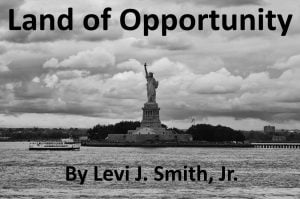 On a shelf at the offices of Northwest Educational Services stands a 105 year-old set of the Harvard Classics.  This 51-volume anthology of classic works of world literature was first assembled and edited by Dr. Charles Eliot, the president of Harvard University at the turn of the 20th century.  It was known as Dr. Eliot’s Five Foot Shelf.  Prior to assembling and editing the set in 1909, Dr. Eliot would lecture on acquiring knowledge, and propose that a first rate liberal education could be gained by reading for fifteen minutes a day from the great works of literature, history, and science that could fit on a five-foot shelf.  Collier’s Publishing Company encouraged him to put that set of books together, and it became available for sale about 1909.  When the rubber met the road, his “five feet” turned out to be six feet. 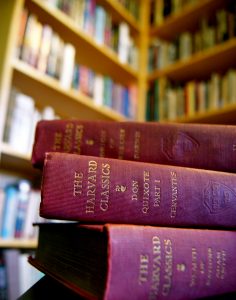 We turn now to Greg Smith’s acquisition of this particular set of books, and to Greg’s grandfather, Levi Smith.  Levi arrived at Ellis Island as an immigrant from Wolverhampton, England in 1905 as a 23 year-old.  He came with his father, and Ellis Island records reflect Levi possessed $50.00 and his father $77.00. They had traveled in steerage class for six days on the largest ocean liner of its day never getting above decks. They found work in steel mills, and then the new aluminum mill in a suburb of Pittsburgh, Pennsylvania.  In two years they were able to afford the passage from Wolverhampton to Pittsburgh for Levi’s mother and several siblings.  Levi focused on beginning the steps and time required to gain U.S. citizenship.  And he wanted to be an educated U.S. citizen, a stature not possible in the class stratification holding down the working class in Britain at the time.  We are not sure how this set of books came to his attention, but in 1911 this mill worker living near Pittsburgh arranged to purchase a new set from a book publisher in New York City.  We assume he started a reading program exceeding fifteen minutes per day, but it was not enough to get him to his goal.  And so, when he was in his thirties, after a ten hour-day tending furnaces in the mill, he would board the train for the twenty mile ride into the city and attend night school at the University of Pittsburgh.  After five years, he received a bachelor’s degree in business, majoring in accounting.  Alcoa (the aluminum company) moved this hard-charger out of the mill and into the corporate offices.  For thirty years he advanced through the executive ranks of the company, retiring with a nice pension in 1948, and moving his family to Eugene, Oregon.  Greg’s dad (Levi, Jr.) inherited the books (sadly little-read by that engineering and lawyer type), and a few years ago they were passed on to Greg, who promised that all his students would read each and every one.  Even Volume 8, NINE GREEK DRAMAS.

So when you look at that set of the Harvard Classics, reflect on what can come from a desire to learn and a willingness to work extraordinarily hard, and how lucky we all are to live in this great Land of Opportunity.  And put away your smartphone once in a while.