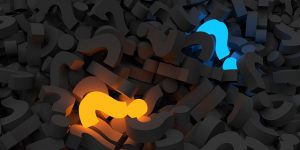 There is a classic episode of The Simpsons where the family moves to a more affluent town with a better school. On his first day of class, Bart reveals that he doesn’t know how to read or write cursive, so the teacher pulls him aside and asks him about what he knows: 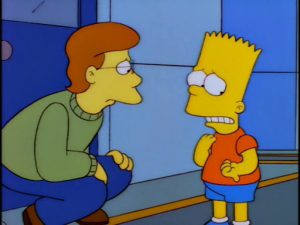 This moment actually reveals an important distinction that students often overlook: familiarity with something isn’t the same thing as truly knowing it. You can know of something without actually knowing it.

The English language doesn’t do a clear job distinguishing between these two types of knowledge. When someone says, “I know trigonometry.” they could mean that they have a deep understanding of trigonometry, have studied and practiced it a great deal, and could teach it or be tested on it and do well. Or, they could simply mean that they’re aware that it is an area of math involving triangles and angles, along with some things called sine, cosine, and tangent – they’re familiar with trigonometry, but they don’t really know how to do it.

Spanish, on the other hand, does distinguish between these two types of knowing. There is a word, conocer, which means “to know of” or “to have met” or “to be familiar with,” and there is another word, saber, which means “to know,” as in “to know a fact” or “to know how to do something.” Sometimes an English-speaking Spanish student will reveal the importance of this distinction whilst failing to remember it. They’ll use the wrong word while writing a sentence that would, in English, use the word “know,” and I’ll ask, “Do you remember the saber-conocer thing?” And the student will go, “Oh yeah! I do remember that! Which one is which again?” The student is familiar with the distinction, but doesn’t really know it.

This is a very common phenomenon in all areas of school because the brain retains familiarity more easily than it does true knowledge. Creating familiarity is easy, just as recognizing the face of someone you met last year is easy. Creating true knowledge is hard, just as remembering the name of that person is hard. And if that person whose name you forgot were to tell you that his name is James, you’ll probably say, “Oh yeah! That’s right!” as though you knew. You’ll even feel like you knew after you were reminded of his name. You might have even been able to select the correct name on a multiple choice test. But that’s not true knowledge. If you really knew his name, you would have seen him and immediately thought, That’s James. If you have to be reminded, you don’t really know.

And you know that feeling when you can’t remember something, but it’s on the tip of your tongue? You feel like you know it, but you just can’t spit it out? Yeah, you don’t really know it. You’re familiar with it, but that’s all. Conoces, pero no sabes.

This is one reason why looking over your notes or looking through the chapter isn’t effective studying: It cues up familiarity, which has very little to do with real knowledge.2 Familiarity makes you feel like you’re ready when you’re not, causing you to avoid doing the work of active studying.

If the student really knows the concept, they can teach it to me from scratch with no notes and no reminders of subtopics. If it’s a history topic, they can tell the story of that particular part of history without notes. If it’s math, they can do a variety of problems of that type correctly and without help.

You think you know something? Cool. Prove it. Take a practice test. Do a brain dump. Find someone who will listen and teach it to them. If you can’t succeed at these tasks, you don’t really know the concept, and you’re not ready for the test.

It’s okay to admit you don’t really know something.

This can be really tough for students (and everyone else). We’re all inclined to reflexively say, “Oh I know that,” when we have to be reminded of something. It’s just a reflexive defense we have against the discomfort of admitting that we’ve forgotten or that we never learned it well in the first place.

In large part, we struggle with owning up to it because we’ve collectively made ignorance something to be embarrassed about. We talk in terms of what you “should” know, as though, if you don’t know, there’s something wrong with you.  Even just the word “ignorance” has a harsh, judgmental feel to it. But it’s just a word that means “lack of knowledge or information.” Why should it be shameful to be lacking some piece of knowledge?

This is classic growth mindset vs. fixed mindset stuff. Growth-minded people are comfortable being ignorant, being beginners, and asking for help.3 Fixed-minded people only want to show the world that they’re smart, so they hide their ignorance.3

There ought to be no shame in not knowing something, no matter how old you are or how simple the concept is. We’re all born ignorant. We go through life acquiring knowledge at our own pace, and acquiring countless knowledge gaps along the way. Everyone’s knowledge gaps are different, so two people of equal intelligence with the same educational background will have different knowledge. What is easily understood by one person might be a mystery to the other. When you don’t know something, it doesn’t mean there’s something wrong with you. The problem is not you.

And there should be no shame in forgetting. Forgetting is one of the things the human brain does best. Getting information to stick is hard. When a student has forgotten something they once knew, it often means that they didn’t follow up on their initial learning with spaced repetition, or they arrived at “I get it!” on the mastery path but then stopped working on the topic. And because the mastery path is a muddy slope, when you stop working, you slip backwards. 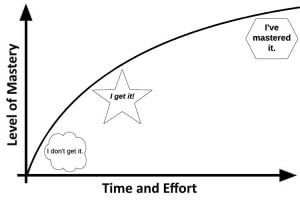 In other words, forgetting results from a failure to be strategically engaged with memory formation, which often goes hand-in-hand with not knowing how learning really works. This is why we put so much of our energy into teaching students how to learn instead of just teaching them the content they’re studying.

It’s good to know when you don’t really know.

Knowing how to distinguish between what you really know and that which is simply familiar doesn’t just cure you of your overconfidence – it also prompts you to get help and get to work. If you can be honest with yourself, you’ll make better progress, and if you can be honest about what you don’t know with your teachers, tutors, parents, and coaches, you’ll get better help. People will generally assume you’re fine and don’t need help unless you speak up.

A classic example is not knowing the vocabulary that’s part of a question. How can you possibly answer the question correctly if you don’t know some of the words that are in the question? And yet, it’s very common for students to try to answer the question without looking up the vocab or asking. When the student is sitting next to me, the solution is easy: I ask them to define the words I suspect they don’t know, and when they don’t know, I tell them and have them write down the definitions. But when students are on their own, they need to able to admit to themselves that they don’t know the words, pause, and look them up.

In the end, you need both types of knowing.

Sometimes students manage to achieve true knowledge without knowing the name of the thing they’re learning. This creates a different problem. Long-term memory is built when something we know very well is given a name, and we file all the information associated with it under that name. (This is called “chunking.”2) If you don’t know the name of what you’re learning, you’ll have a harder time recalling it later.

For example, if your Precalculus teacher tells you that a trigonometry problem that has you stumped has to be solved by factoring it like a quadratic, and you don’t immediately recall what “factoring a quadratic” is, you’re going to have a tough time. You might have no trouble factoring a quadratic if you’re presented with a familiar example, even though you don’t know the name of the thing you’re doing, but you won’t be able to access that knowledge quickly without the name of the concept.

So while true knowledge might be more important than familiarity, the reality is that you need both. Necessitas saber y conocer.

2 Oakley, Barbara. A Mind for Numbers: How to Excel at Math and Science (Even if you Flunked Algebra). Penguin, 2014.