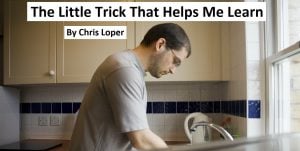 The other day, while washing the dishes, I found that I was mumbling to myself, “molarity is moles per liter, and molality is moles per kilogram. In both cases, you will probably be given some amount of a compound in grams, and you will first need to convert grams to moles using the molar mass of the compound.” Odd, I know.

You see, I had just learned this from a chemistry textbook a few hours earlier. When I caught myself doing this, it dawned on me that I was studying.

Most of the time we talk about “studying” here at Northwest Educational Services, we’re referring to a very active form of studying that involves writing, which is the most powerful way to commit information to memory. However, there are many moments during which we could be thinking about whatever we’ve been learning when writing isn’t an option.

The version of studying that I was engaged in when I was rehearsing that bit of chemistry is called recall practice. The goal of recall practice is simply to see how much you can remember of whatever you’re trying to learn without references or notes.

This exercise can, of course, be done with paper and pencil – and that is actually the better version of it – but knowing that it can also be done without writing greatly expands the number of opportunities we have for studying. Recall practice can be done in a wide variety of situations such as going for a walk, brushing your teeth, waiting for the bus, sitting in a car, or any other time when you don’t have to be actively thinking about something else. Every time you use one of these opportunities to mentally revisit the content you’re working on, you tap into the power of spaced repetition, wherein frequently thinking about the content enhances both memory and understanding.1

Thinking back on my life, I realized that this is a little mental trick that I’ve always engaged in without realizing it. Only recently, as I’ve become more aware of the science of good learning, have I realized that I was doing recall practice.

Imagine two students: Joey and Karl. These two boys are equally intelligent and both do an equal amount of traditional, on-paper studying. Despite their similarities, Karl routinely gets better grades on tests than Joey. Joey is confused and frustrated because Karl doesn’t seem to work any harder than he does. But Karl has a secret: his brain is busy. Karl uses his downtime to think about what he’s learning. Karl is studying far more than Joey, even though it doesn’t look like it.

When I was a student, I got away with significantly less traditional studying than my peers, and I now realize that this is a big part of the reason why. It turns out that I was always studying, even when it didn’t look like it. In recent years, however, I’ve actually started having a more difficult time learning new content, and until recently, I couldn’t figure out what had changed.

The answer came to me while I was standing in line at the grocery store. I’m not particularly inclined to talk to my fellow shoppers while waiting in line, so my options were either to stand there and be bored or check email on my smartphone. I chose the latter. Ten years ago, when I was a university student, I didn’t have a smartphone, so my only option would have been to stand there and be bored, which, I suddenly realized, was actually a good thing.

By choosing to check my phone, I had missed an opportunity to do a little recall practice. In fact, because checking my phone has become such a frequent impulse, I’m now missing out on many opportunities to revisit ideas that I’m trying to learn. It’s no wonder that I’m finding it more difficult to remember new content.

I’ve resolve to re-embrace being bored, so I can get back into my old rhythm of doing recall practice throughout the day. This means I’m spending more time with my phone in airplane mode. The payoff is that my brain spends more time in student mode.