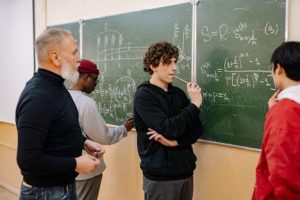 Many students find story problems in physics (which is most problems in physics) to be overwhelming. And every time this comes up, I teach the very same method I learned from my physics teacher in high school. The way to solve almost any physics problem is a simple, step-by-step strategy for managing cognitive load.

I’ll use the following question to demonstrate the method:

Princess Toadstool stands on the edge of a 30.0 m high cliff. She throws Bowser upwards at 20.0 m/s. If Bowser falls all the way to the bottom of the cliff, find his velocity when he hits the ground.

The first thing you do is draw a little picture or diagram of the situation. The picture might include some numbers, some variables, some force arrows, maybe some stick figures – whatever makes sense. It’s not about art; it’s about getting a sense of what’s going on. 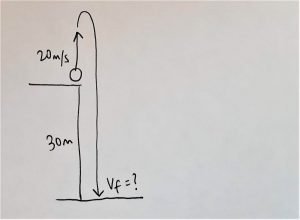 Make a list of all the variables you know, with their numerical values and units. Some of these will not be explicitly stated. For example, an object that is dropped off a cliff has an initial velocity of 0.0 m/s and the standard downward acceleration caused by gravity.

Add all of the variables you don’t know that might be relevant to your list, but leave them blank. For the variable the question is asking you to solve for, write a question mark to indicate that it’s the goal.

Also, assign a positive and negative direction, so you can give relevant values the appropriate sign. 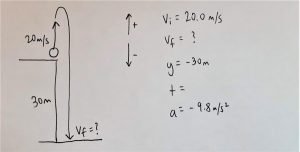 Step 3: Write down the relevant equations

There are probably just a handful of equations that might help you solve this particular physics problem. These will be the equations that use the same variables that are on your list. Find them in your notes and write them down. Bonus points if you have them memorized, but still write them down because it will make the next step easier.

Step 4: Choose an equation (or equations)

In our example, the third equation is the best fit.

Here’s where many students go awry. They know which equation to use, so they attempt to go straight to plugging in the numbers. It is possible to do this without screwing it up, but it’s risky.

I recommend starting by writing just the generic equation with space below it to work, and then rewriting it directly underneath with numbers plugged in for the variables you know. This prevents many errors.

At this stage, all you have left is crunching the numbers and maybe a little algebra. But still be careful and show all of your steps. When you get a final answer, make sure you include units and round to the appropriate number of sig figs. 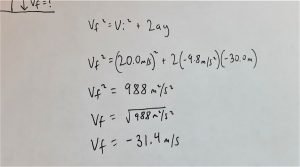 Whatever number you get, make sure it seems reasonable for the given situation. If the question asks you how long it takes for a rock to fall from atop a cliff, and your answer is 6,742 seconds, this should signal that something has gone awry.

If that happens, no worries. You’ve laid everything out clearly on paper, so it shouldn’t be too hard to go back through and find what went wrong.

Notice how, in this problem, I put the final velocity as negative 31.4 m/s because I assigned down as negative, even though my calculator gave me a positive answer for the square root of 988.

Here’s a quick review of the seven steps:

Now you know how to solve messy, overwhelming physics problems. The next time you’re confused by a question, check in with these steps. If you haven’t followed them, start there. Most of the time, your confusion will evaporate.