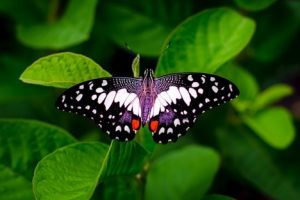 It’s springtime, which is one of the best times to go observe biology in action. If you go out into a park that has a forest, such as Carkeek, Seward, or Discovery in Seattle, you can see quite a lot if you look for it.

As you look, I want you to think about the strategies that plants and animals are using. Ask yourself why they’re doing what they’re doing and why they are the way they are. The features of these organisms are products of natural selection. As such, they all serve the purpose of helping them survive and reproduce. When you see something unusual, try to figure out what its purpose might be.

Also keep your eyes out for examples of concepts you might have learned in a biology class, such as symbiosis, decomposers, and convergent evolution. They’re all out there. They’re all real. The joy of spring is in the details, and part of that joy is pondering the biology revealed by those details.

Here are some of my favorite examples.

Right now, the smaller plants in the underbrush and the younger trees already have their leaves, but the old, tall trees don’t. Have you ever wondered why? Well, the younger trees and bushes need to capture as much sunlight as they can before the tall trees grow their leaves. The forest might seem like a peaceful place, but there is fierce competition among the photosynthesizers for access to those precious solar rays. 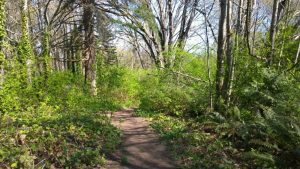 But then, why don’t the big trees just make their leaves now too? Why do they wait until later in the spring? I don’t know for sure, but I think they wait due to the risk of snowfall. If a big leaf maple grows its leaves too early, and then we get a once-in-10-years spring snowstorm, its enormous branches won’t be able to hold up all the extra weight of snow-covered leaves. So rather than risk breaking branches, it waits, knowing it will dominate the competition for sunlight come summer. The smaller trees and bushes have to risk it because this is their only chance, but they’re also taking a smaller risk. Their branches are lighter and more flexible, so they’re less likely to break if it snows. 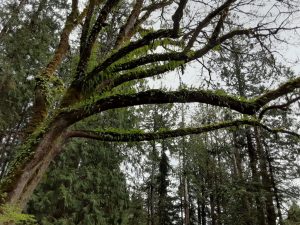 You might also notice some moss and ferns piggybacking on a big maple in order to get a leg up. As my friend Ross likes to say, it’s “life on life on life!” They’re probably not doing the tree any favors by setting up residency on its trunk and branches, but they’re also not harming it. If they did, they might lose their home! This is a form of symbiosis known as commensalism, in which one species benefits from another without offering anything in return (but also without causing harm).

Down on the forest floor, you can probably find some dead trees that have fallen over. There is a good place to look for mushrooms (but please don’t eat them!). Mushrooms are decomposers. They break down dead plants, helping to create more soil and feeding themselves in the process. The coolest thing is that most of the fungus is inside the dead tree, and the visible mushroom is just the fruiting body it uses to reproduce! 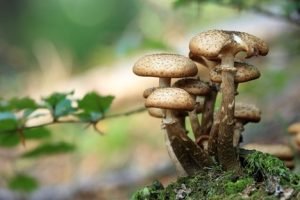 As you walk around the forest, it’s fun to remember that there are vast networks of underground fungi trading nutrients with plants through their roots. These mycorrhizal networks are an example of mutualism, a form of symbiosis in which both species benefit. Trees actually use these root-fungi networks to share resources and even information with each other! Check out this TED talk to learn more.

This is an ecosystem in action. 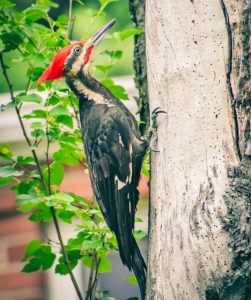 Now, if you’re lucky, you might spot a pileated woodpecker, banging its head against a dead tree in an effort to find bugs or grubs to eat. (You’ll probably hear it before you see it.) But wait, if you or I banged our head against a tree like that, we’d get a concussion! How does the woodpecker survive all those blows? The answer is as surprising as it is weird. The woodpecker has several adaptations to accommodate all that headbanging, but the most interesting one is that its tongue is wrapped around the back of its brain for cushioning!1 How cool is that?! Click here to see a picture of this. The long tongue can also be extended for fishing insects out of holes.

If you’re really lucky, you might see an owl. Though mostly nocturnal, you can sometimes see them during the day. But if it’s hunting, you won’t hear it. I once had one fly right over my shoulder, completely silent. Owls hunt rodents that have excellent hearing, so their feathers are designed to make no noise as they fly. 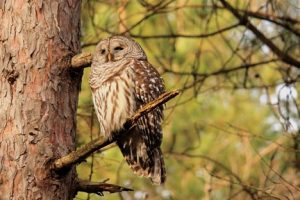 Just walking around your neighborhood, you can probably find a rosemary bush in bloom. The rosemary bush is flowering, which makes it an angiosperm. But it has needles, like a fir tree, which is a gymnosperm. Gymnosperms reproduce by making cones (think pine cones). Since those are two completely different lineages of plants, the rosemary’s needles are an example of convergent evolution. Just as dolphins independently evolved bodies and fins that are much like those of sharks, rosemary evolved photosynthesizing needles rather than leaves that are much like those of its very distant fir tree cousins. (They’re also delicious!) 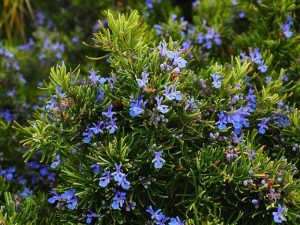 One thing I like to do in the spring is look at flowers, and not just because they’re beautiful. Flowers also have a lot to teach about evolutionary strategies.

Many flowering plants first produce leaves, then flowers, and then berries. Thimbleberries and blackberries are good examples. And this strategy makes sense: Produce leaves to collect solar energy, use some of that energy to make flowers in order to attract pollinators (such as bees). Once pollinated, they can produce seeds. Finally, using glucose created during photosynthesis, they can wrap those seeds in fruit in order to entice animals to eat them. When animals eat the fruit, they end up spreading the seeds around. 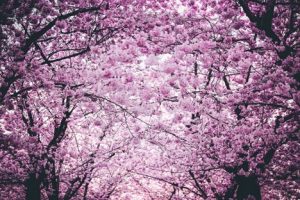 Other plants, like cherry trees, start with flowers, using energy saved from last summer. Later, they’ll produce leaves to capture energy, photosynthesize, grow, and store some energy for next spring. The funny thing about flowers is that we like them even though they’re not designed to attract us – they’re designed to attract pollinators. And many flowers look very different under ultraviolet light, which is how bees see them. 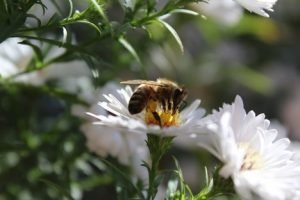 So then why do we like flowers in the first place? Humans tend to like things that helped our ancestors survive and thrive – that’s how human nature works. But flowers don’t do me any good. So why do I think flowers are beautiful? On this mystery, I have two ideas. One is that flowers are simply an indicator of a thriving ecosystem, and a thriving ecosystem would have been full of plants and animals that my ancestors could have eaten. The second idea is that flowers often precede fruit. You can’t have blueberries without first having flowering blueberry bushes that get pollinated. So if I enjoy going to the places where there are flowers, I’ll know where to find berries. I might even get there first! 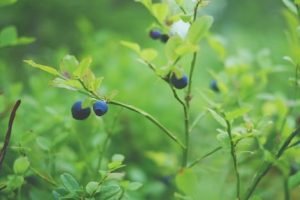 Aside from the berries they produce, plants don’t take too kindly to being eaten. To prevent herbivorous munching, they’ve evolved various defenses. Thorns clearly say “don’t eat me.” Stinging nettles send a similar message, though clever humans know you can boil them to get rid of the stinging part. 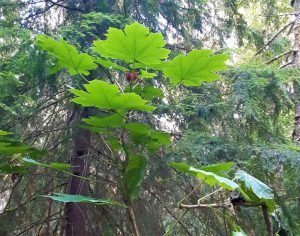 Devil’s club is particularly interesting. During the summer, when it has fruit, you’ll notice that the fruit is up high, in the middle, and guarded by copious thorns and spiky leaves. The signal is clear: This fruit is not for deer, and it’s not for people. It’s for birds. Why is this a good strategy? Because birds are better at spreading seeds.

My goodness science is fun!

Want to learn more? Check out my friend Ross’s YouTube Channel, Nerdy About Nature. He’ll teach you all about the plants of the Pacific Northwest!

1 “Why Does a Woodpecker Not Bash Its Brains In When It Pecks?”