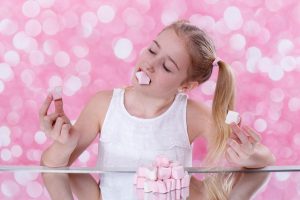 If you’ve never heard of the famous “Marshmallow Test,” let me describe it for you. Back in the 1960s and 1970s, at Stanford, Walter Mischel and his team performed experiments in which kids would be offered a treat – a cookie, a pretzel, a marshmallow, etc. – but with a twist: The children would be promised a second treat if they could wait 15 minutes to eat the first.1 So picture a preschooler, in a room with a researcher, sitting at a table. On the table is a plate with one marshmallow on it. The researcher says, “This is yours to eat whenever you like, but if you wait 15 minutes, I’ll give you a second one.”1

It was a test of self-control, a test of delayed gratification. Some kids could wait, and some kids couldn’t, Most who couldn’t make it for 15 minutes tried to wait, but eventually caved and ate the treat.1 This, in and of itself, wasn’t very interesting. What caught the public’s attention was the follow-up Mischel’s team did. They tracked these kids for years, even decades. And their results showed that a young child’s ability to demonstrate self-control was predictive of his future success:

“The more seconds they waited at age four or five, the higher their SAT scores and the better their rated social and cognitive functioning in adolescence. At age 27-32, those who had waited longer during the Marshmallow Test in preschool had a lower body mass index and a better sense of self-worth, pursued their goals more effectively, and coped more adaptively with frustration and stress. At midlife, those who could consistently wait (‘high delay’), versus those who couldn’t (‘low delay’), were characterized by distinctively different brain scans in areas linked to addictions and obesity.”1

Wow. It was pretty stunning to learn that your self-control ability in preschool predicts so much about your future, that is, until new research refuted this finding.

More recent research addressed many of the problems with Mischel’s study design including treat choice, sample size, and the population from which the sample was drawn. “The updated version of the marshmallow test – in which the children were able to choose their own treats, including chocolate – studied 900 children, with the sample adjusted to make it more reflective of US society, including 500 whose mothers had not gone on to higher education. Mischel’s original research used children of Stanford University staff, while the followup study included fewer than 50 children from which Mischel and colleagues formed their conclusions.”2

This newer research failed to replicate Mischel’s results and showed that the test has very little predictive value at all.2 Tyler Watts, one of the researchers, had this to say, “‘We found virtually no correlation between performance on the marshmallow test and a host of adolescent behavioural outcomes.’”2 The test might show how well a child can delay gratification now, but it doesn’t show how well they’ll be able to do it in the future.

Toward a Growth-Minded View of Willpower

Really, these new findings shouldn’t be surprising at all. Preschoolers aren’t exactly known for their incredible self-control. The part of the brain in charge of restraint and delayed gratification – the prefrontal cortex – is highly undeveloped in young children, and doesn’t become fully developed until around the age of 25.3 And even after that, it can continue to be strengthened with physical exercise, meditation, and play. We don’t expect a child’s ability to read, write, or do math at age five to predict their future academic success, so we shouldn’t expect their willpower to be predictive either.

We should adopt a growth mindset about self-control. Willpower is a skill that you can learn and a muscle that you can grow, and there are numerous strategies you can employ to reduce your dependence on willpower in the first place. In fact, Mischel’s own research shows that this is true. Over the years, he and his team ran numerous variations of the Marshmallow Test, and they saw that teaching children self-control strategies improved their ability to delay gratification.1 Unfortunately, this side of his work has largely been ignored. You can find details about it in his book, The Marshmallow Test: Why Self-Control Is the Engine of Success,

but if you want an entertaining, abbreviated look at these strategies, please enjoy this hilarious video where Cookie Monster has to wait to eat some cookies – not his strong suit – and he learns some strategies to help him stay in control.

Really, what happened was that the media focused on just one of Mischel’s findings, which turned out to be the one that reinforced our cultural narrative of people being “fixed” with whatever traits they have from birth or early childhood. His observations of the children who succeeded led to useful insights about which self-control strategies are most effective.1 His research partner, University of Washington professor Yuichi Shoda, had this to say:

“‘It was very ironic that everyone used the study to support the trait perspective … Because Walter [Mischel] was fighting that his whole career. In actuality, we were trying to show that kids can enhance their control over situational pressures through if-then strategies.’”4

The majority of Mischel’s findings and most of his book remain valid and useful, and they align with our understanding that the brain is like a bunch of muscles and our recognition of the power of strategy. And even more to his credit, Mischel advocated for leading by example: “Arguably the best answer to the ‘What can we do to help our children?’ question is to model what you would like them to become.”1

Furthermore, Mischel was right to highlight the significance of self-control. It is an important skill, and it’s one we can learn and practice at any age.

1 Mischel, Walter. The Marshmallow Test: Why Self-Control Is the Engine of Success. Back Bay Books, 2015.