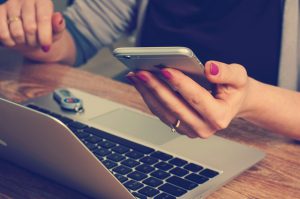 People seem to always be doing two things at once. We work on projects while responding to emails. We text in the middle of conversations with friends. We scroll through Facebook while watching TV. Modern humans are constantly multitasking.

Many experts argue that we’re not even capable of multitasking. When we think we’re multitasking, they say, we’re actually just rapidly switching back and forth between tasks. John Medina, a research professor at the University of Washington, says that “Multitasking, when it comes to paying attention, is a myth. The brain naturally focuses on concepts sequentially, one at a time.”1 And science writer Christian Jarret, Ph.D., has this to say:

“Studies show that the human mind can only truly multitask when it comes to highly automatic behaviors like walking. For activities that require conscious attention, there is really no such thing as multitasking, only task switching—the process of flicking the mind back and forth between different demands. It can feel as though we’re super-efficiently doing two or more things at once. But in fact we’re just doing one thing, then another, then back again, with significantly less skill and accuracy than if we had simply focused on one job at a time.”2

Hmmm… so we can’t truly multitask, and what we’re actually doing all the time – task switching – is hurting our performance. In his great book, Deep Work, Cal Newport describes research that shows “when you switch from some Task A to another Task B, your attention doesn’t immediately follow—a residue of your attention remains stuck thinking about the original task. … and the more intense the residue, the worse the performance.”3

With regard to learning, Dr. Barbara Oakley says this in her great book, A Mind for Numbers,

“Multitasking is like constantly pulling up a plant. This kind of constant shifting of your attention means that new ideas and concepts have no chance to take root and flourish.”4 In other words, when you’re trying to learn something new, and you’re just starting to get it, switching your attention to something else causes your newfound understanding to evaporate. If you really want something to make sense, and if you want it to stick, you have to give it your full attention.

This is easier said than done. The modern world has almost limitless distractions. Although technology has brought many benefits, it has also come with a serious cost: It interrupts our focus and interferes with our doing the task at hand effectively and even safely. In their book, The Distracted Mind, Adam Gazzaley and Larry Rosen ask, “Is it any wonder that 80 percent of car accidents and 16 percent of highway deaths are the consequence of distracted driving? We are all cruising along on a superhighway of interference.”5

Furthermore, it’s not just making us worse at whatever tasks we’re trying to do, it’s also costing us time as Alex Soojung-Kim Pang pointed out in The Distraction Addiction:

“Every time you move from one window to another on your computer or move from reading your e-mail to listening to a conference call, your mind has to spend energy. By some estimates, you can lose several working hours every week to these moments, which come at exactly those times when you want to be most productive.”6

So we think that “multitasking” is being efficient, but it’s actually slowing us down. And even more troubling is that we’re mostly blind to the costs. Gazzaley and Rosen note that “we are mostly oblivious to the toll that constant task switching generates. We convince ourselves that we can handle it because we mistakenly believe that we possess a brain that is built for multitasking; or, because we do it all the time, we feel that we must have become really good at it.”5

In reality, however, the more often we engage in task switching, the worse we become at managing distractions, staying focused, sorting the important information from the irrelevant, and even on task switching itself.1 In other words, the more you “multitask,” the worse you become at it.

Now parents, please don’t make the mistake of thinking I’m talking about a problem your kids have. This is a problem we all have. And if today’s youth are tech-addicted and constantly switching tasks instead of focusing on schoolwork, that’s not really their fault. This is the world we gave them. And the best thing we can do is lead by example.

So what are we to do? The answer is simple: Do one thing at a time. Monotasking is what we’re actually built for. Here’s Cal Newport again:

“To produce at your peak level you need to work for extended periods with full concentration on a single task free from distraction. Put another way, the type of work that optimizes performance is deep work.”3

And even though the modern world pulls us away from that way of working, we can take steps to insulate ourselves from all the distractions that bombard us on a daily basis. For starters, we can remember that our devices are just tools, and we have the power to turn them off or put them away. I spend most of my day in airplane mode to facilitate monotasking. If you’re tired of being interrupted by notifications, consider a little experiment in which you do the same.

Importantly, if you haven’t been spending time each day monotasking, you’ll probably find it to be very difficult at first. Deep work takes practice.3 Remember that staying focused requires actively engaging the part of the brain that is responsible for focus: the prefrontal cortex.7 Practices like breathing meditation and reading give your prefrontal cortex a workout. Focus is a muscle; it gets stronger when you use it.

2 Glei, Jocelyn K. with 99U. Manage Your Day-to-Day: Build Your Routine, Find Your Focus, and Sharpen Your Creative Mind. The 99U Book Series. Amazon Publishing, 2013.

4 Oakley, Barbara. A Mind for Numbers: How to Excel at Math and Science (Even if you Flunked Algebra). Penguin, 2014.

6 Pang, Alex Soojung-Kim. The Distraction Addiction: Getting the Information You Need and the Communication You Want, Without Enraging Your Family, Annoying Your Colleagues, and Destroying Your Soul. Little, Brown and Company, 2013.