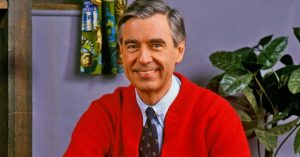 Those words of wisdom are just the tip of the iceberg that is Fred Rogers. More commonly known as “Mr. Rogers,” he hosted the PBS children’s show Mr. Rogers’ Neighborhood for over 30 years. He also wrote songs and books, testified before Congress and touched millions of lives with his calm presence, kind-hearted demeanor, and wise words.

Here is a sampling of things he said and wrote that all people, and especially all parents, will benefit from reading.

“I like to swim, but there are some days I just don’t feel much like doing it—but I do it anyway! I know it’s good for me and I like to keep my promises. That’s one of my disciplines. And it’s a good feeling after you’ve tried and done something well. Inside you think, ‘I’ve kept at this and I’ve really learned it—not by magic, but by my own work.’”2

Mr. Rogers knew the importance of exercise, and he was committed to doing it, even though he often didn’t feel like it. The important things to note are that 1) he didn’t pretend to have unlimited motivation, and 2) he highlights the fact that it feels good after you’ve put in the work.

Although he had help, he was the primary writer and musician for all 900 episodes of Mr. Rogers’ Neighborhood. But he didn’t pretend it was easy to do. In fact, he struggled with doing the work so badly that he once wrote himself this memo:

“Am I kidding myself that I’m able to write a script again? Am I really just whistling Dixie? I wonder. If I don’t get down to it I’ll never really know. Why can’t I trust myself? Really that’s what it’s all about… that and not wanting to go through the agony of creation. AFTER ALL THESE YEARS IT’S JUST AS BAD AS EVER. I wonder if every creative artist goes through the tortures of the damned trying to create? Oh, well, the hour cometh and now IS when I’ve got to do it. GET TO IT, FRED. GET TO IT… But don’t let anybody ever tell anybody else that it was easy. It wasn’t.” 1

Wow. The lesson here is that, even though some people appear to have superhuman willpower, everyone struggles sometimes. Procrastination is universal. Self-doubt is universal. So parents shouldn’t put on a façade in front of their children and pretend things are easy. Kids need to see adults struggle so they know it’s normal.

“I’ve often hesitated in beginning a project because I’ve thought, ‘It’ll never turn out to be even remotely like the good idea I have as I start.’ I could just ‘feel’ how good it could be. But I decided that, for the present, I would create the best way I know how and accept the ambiguities.” 1

Mr. Rogers, like many of us, suffered from one of the most common sources of procrastination: perfectionism.

“One of the strongest things I have had to wrestle with in my life is the significance of the longing for perfection in oneself and in the people bound to the self by friendship or parenthood or childhood.” 1

And he didn’t make light of this issue. He knew how powerful it was. Critically, he points out how our perfectionism extends beyond ourselves to encompass all the people closest to us. But he also understood that perfectionism was irrational.

And he understood that getting over it requires giving ourselves and others permission to be human.

“Sometimes, doing ‘the best we can’ may still fall short of what we would like to be able to do, but life isn’t perfect—on any front—and doing what we can with what we have is the most we should expect of ourselves or anyone else.” 2

Accepting Children as They Are

Mr. Rogers liked to emphasize the uniqueness of each individual. He liked to honor that uniqueness and encourage people to express themselves fully.

“As human beings, our job in life is to help people realize how rare and valuable each one of us really is, that each of us has something that no one else has—or ever will have—something inside that is unique to all time. It’s our job to encourage each other to discover that uniqueness and to provide ways of developing its expression.” 1

The end-goal of school is not to produce “normal” humans who all live up to our preconceived notions of success.

“As far as I’m concerned, this is the essence of education: to facilitate a person’s learning, to help that person become more in tune with his or her own resources so that he or she can use whatever is offered more fully.” 1

And he felt similarly about the purpose of parenting.

“If the day ever came when we were able to accept ourselves and our children exactly as they are, then, I believe, we would have come very close to an ultimate understanding of what ‘good’ parenting means.” 1

He believed that for children to take necessary risks, they would have to first feel secure in the unconditional love of their parents.

“Moving confidently toward independence depends to a great extent on there being a sure foundation of early love to build on, and a fundamental trust that help will be there when we need it. Love and trust are what most enable children to risk trying to be themselves.” 1

And he went on to describe what that sort of unconditional love looks like.

“When we love a person, we accept him or her exactly as is: the lovely with the unlovely, the strong along with the fearful, the true mixed in with the facade, and of course, the only way we can do it is by accepting ourselves that way.” 1

It’s important to note how much of a role self-love plays in our ability to give others love.

And, of course, Fred Rogers believed in the importance of parental self-improvement and leading by example.

“That chores have to be done before play; that patient persistence is often the only road to mastery; that anger can be expressed through words and nondestructive activities; that promises are intended to be kept; that cleanliness and good eating habits are aspects of self-esteem; that compassion is an attribute to be prized—all these are lessons children can learn far more readily through the living example of their parents than they ever can through formal instruction.” 1

One of the things he encouraged parents to model for their children was gratitude.

“But how do we make goodness attractive? By doing whatever we can do to bring courage to those whose lives move near our own—by treating our ‘neighbor’ at least as well as we treat ourselves and allowing that to inform everything that we produce. Who in your life has been such a servant to you . . . who has helped you love the good that grows within you? Let’s just take ten seconds to think of some of those people who have loved us and wanted what was best for us in life—those who have encouraged us to become who we are tonight—just ten seconds of silence.”2

“I’d like to be able to let children know that they are not alone with their feelings— that there are other people and other children who have those kinds of feelings . . . the same fears and the same joys—to let them know there is an adult who cares.” 1

Even before the modern, always-connected-but-always-alone world of social media came into being, Fred Rogers understood how isolated children often feel. He wanted to make it okay to talk about feeling bad because he knew that these universal feelings only grow worse when they’re hidden away in shame.

“There is no normal life that is free of pain. It’s the very wrestling with our problems that can be the impetus for our growth.”2

Mr. Rogers understood that, on the ride of life, pain is the price of admission. And, in classic growth-mindset fashion, he insists that struggle makes you stronger.

And that struggle is particularly important if you want to become great at something.

“When I was in college, I went to New York to talk to a songwriter I admired very much. I took him four or five songs that I had written and I thought he’d introduce me to Tin Pan Alley and it would be the beginning of my career. After I played him my songs, he said, ‘You have very nice songs. Come back when you have a barrelful.’ A barrelful of songs! That would mean hundreds of songs. I can still remember the disappointment I felt as I traveled all the way back to college. Nevertheless, that man’s counsel was more inspired than I realized. It took me years to understand that. But, of course, what he knew was that if I really wanted to be a songwriter, I’d have to write songs, not just think about the five I had written. And so, after the initial disappointment, I got to work; and through the years, one by one, I have written a barrelful. In fact, the barrel’s overflowing now, and I can tell you, the more I wrote, the better the songs became, and the more those songs expressed what was real within me.” 2

A young Fred Rogers got a rude awakening as to what it really meant to walk the mastery path, but he stuck it out and, through hard work, became a truly great artist.

But Mr. Rogers wouldn’t want me to leave you thinking that fame and fortune are the only sorts of mastery that matter. He’d want you to know that the most important work of anyone’s life is mastering the art of being yourself.

“My good friend Emilie Jacobson, who was the ‘Poetry Lady’ on our television programs for many years, helped us all to feel good about who we were. She often quoted a poem by Douglas Malloch, and it became her trademark. Here are the first and last verses:

If you can’t be a pine on the top of a hill,

Be a scrub in the valley,

but be the best little scrub by the side of the rill,*

If you can’t be a highway, then just be a trail.

It isn’t by size that you win or you fail.

Be the best at whatever you are.”1

*A rill is a small stream.

1 Rogers, Fred. You Are Special: Words of Wisdom for All Ages from a Beloved Neighbor. Penguin Books, 1995.

2 Rogers, Fred. The World According to Mister Rogers: Important Things to Remember. Hyperion, 2003.