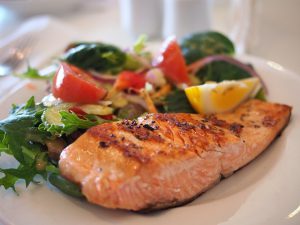 Disclaimer: This is about how food affects the brain. It is not health advice. Please consult your doctor before making any changes to your diet or taking any supplements.

Long-time readers will know that brain health is one of my favorite topics. All other things being equal, students with healthier brains will be happier and more academically successful. They’ll find it easier to focus and have better executive function. They’ll have an easier time solving tough problems and remembering what they’re learning, leading to better test scores and higher grades. And we’ve already covered the importance of sleep and physical exercise and play, so it’s time to finally tackle what is perhaps the most important element of brain health: nutrition.

Eating a healthy diet is strongly associated with good general brain health and stronger brain function.1 In other words, it’s not complicated: What’s good for your body is, in general, good for your brain. And while there are countless fad diets and conflicting views about what’s healthy to eat, there are a handful of simple principles that almost everyone agrees on. Pretty much no one offering nutritional advice suggests eating more processed foods, and pretty much everyone agrees that eating more vegetables is a good idea. We’ve already covered all the ways sugar is harmful to the brain, and you’d be hard-pressed to find a diet book or a nutritionist suggesting that we eat more sugar.

Those simple guidelines are a good start, but there are some details worth looking at, so I’ll now take you on a quick tour beyond the basics. I hope you’re hungry for knowledge because you’re about to learn all about brain food.

Protein from your diet is the source of amino acids, which are the building blocks of cells and, importantly, neurotransmitters – the chemicals used by neurons to communicate with each other.2 However, you do not have to eat meat or chug protein shakes to get the protein you need; there are many different sources of protein to choose from, and, in the western world, it’s not hard to get enough.

Diets very high in animal protein and very low in carbohydrates, such as Atkins or Paleo, are most likely a poor choice for brain health. These diets usually do not include enough complex carbohydrates to keep the brain fueled properly, and there is evidence that such diets impair brain function in mice, suggesting that they might do the same in humans.3 That said, everyone is different, consult your doctor, and run little experiments on yourself to find out what works for you.

Unless you’re in ketosis (very hard to do),4 your brain is running on glucose derived from carbohydrates in your diet.1 And since you’re brain doesn’t store glucose for the future, you have to eat regularly to keep it fueled (hence the importance of breakfast).5 The best way to do this is with complex carbohydrates rather than simple ones because, with their fiber, they digest more slowly.5 In other words, whole grains are better than processed grains, fruit is better than juice, and quinoa is better than candy. You can also slow down the digestion of carbohydrates by mixing them with protein and fat.1

Dietary fat got a bad rap in the latter half of the 20th century, so some people still avoid it like the plague. Now the pendulum is swinging in the other direction, and some people are claiming that dietary fat should make up the bulk of one’s calories. The truth, as usual, is more complicated, so here’s the skinny on fat: We need dietary fat, but not all fats are created equal.

First, eating a diet primarily based on fat – a ketogenic diet – is very difficult to do and should only be attempted under the supervision of a doctor.4 And the other extreme – an extremely low-fat diet – probably isn’t very good either. About 60% of your brain is made of fats,6 and they are an important component of myelin sheaths – the insulation for neural connections that increase signal speed as you develop mastery.7 Furthermore, dietary fats “help carry, absorb, and store the fat-soluble vitamins (A, D, E, and K) in your bloodstream.”6

Second, we need to distinguish between healthy and unhealthy fats. “If your diet is loaded with bad fats, your brain can only make low-quality nerve cell membranes that don’t function well; if your diet provides the essential, good fats, your brain cells can manufacture higher-quality nerve cell membranes and influence positively your nerve cells’ ability to function at their peak capacity.”6 In particular, trans fats, which have been widely shown to cause harm to the body,8 also cause harm to the brain and hinder brain function in a variety of ways.6 Increased consumption of trans fats is correlated with impaired cognitive function.9 How do you know if something has trans fat? One way is to look for the phrase “partially hydrogenated” on the ingredients list.9 If you see that, steer clear. Saturated fats can also be unhealthy and should be consumed in moderation.10 On the other end of the spectrum, we have unsaturated fats, which are generally healthier,10 and the Omega-3’s:

“Omega-3 fatty acids are great for mental clarity, concentration, and focus. They play an essential role throughout your life and should be at the top of your shopping list in terms of positive value for your brain. … Certain foods containing omega-3 fatty acids are especially good for your brain. These include: Certain cold-water fish (bluefish, herring, mackerel, rainbow trout, salmon, sardines, tuna, and whitefish); Olive oil; Flaxseed oil; Peanut oil; Canola oil. Studies have revealed that Omega-3 fatty acids, which are essential for maintaining normal cognitive function, have additional advantages in the brain. For example, DHA and EPA, the Omega-3 fatty acids found in fish, particularly salmon, albacore tuna, sardines, and swordfish, are vital for a sharp mind.”6

Omega-3’s, along with Omega-6’s are “essential” fatty acids because our bodies cannot make them on their own, so they must come from the food we eat. We need both, but our bodies and brains prefer a balance, and the modern American diet makes it really easy to eat way too much Omega-6 and not enough Omega-3.11 Our ancestors likely ate a 1:1 ratio of Omega-3 to Omega-6, and most Americans now eat 1:20 ratio – 20 times more Omega-6 than Omega-3.11 Improving this ratio is as much about eating more Omega-3-rich foods like salmon and flaxseed as it is about eating less Omega-6-rich foods. Fried foods like chips and French fries are usually high in Omega-6, as are corn-fed beef and corn-fed dairy products (grass-fed is better).11 So reducing these foods is an easy way to improve your ratio.

Eating a large quantity and a wide variety of fruits and vegetables gives your brain the micronutrients it needs to thrive.5 However, we have a tendency to lump these two types of food into a single category “fruitsandvegetables,” as though they are equally valuable.13 Too many people assume they’re getting all the nutrition they need by just eating fruit and skipping the veggies. You need both, and vegetables, it turns out, are more important because they are more nutrient-dense and have less sugar.13 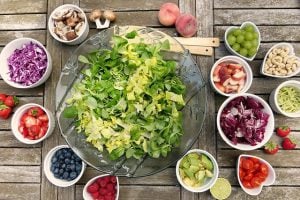 The brain, like the body, needs a wide variety of vitamins and minerals to thrive. However, studies have shown that, in most cases, taking vitamin supplements is not an effective way to get the micronutrients your body needs.14 Therefore, you’ll want to get your vitamins and minerals from the foods you eat. Here are some excerpts from a Psychology Today article titled “Have You Fed Your Brain Today?”:

“Research studies have shown that people with higher blood levels of the antioxidants vitamins C and E, in particular, have fared better on memory tests. Nuts (hazelnuts and almonds in particular), sunflower seeds, and vegetable oils are rich in Vitamin E. Citrus fruits, guava, papaya, strawberries, bell peppers, tomatoes and broccoli are all excellent sources of Vitamin C. Blueberries, which are also rich in Vitamin C, heighten brain function and have significant memory-improving properties.”5

“B vitamins also play important roles in cognitive function. An amino acid, known as homocysteine, is associated with clogged arteries, which result in decreased brain blood flow, causing impairment of mental functions. B vitamins, such as folate, Vitamin B6 and B12, seem to assist in lowering homocysteine levels, while B vitamin deficiencies have been linked to high levels of homocysteine. B12 is essential for an astute mind, as a B12 deficiency is associated with cognitive problems such as memory lapses. B6 also bolsters memory. Folate can be found most abundantly in leafy green vegetables, especially spinach, broccoli, beans, orange juice, and avocados. B12 can only naturally be found in animal products, particularly salmon, beef, shrimp, yogurt, milk and cheese, but it is often fortified in foods such as soy milk and cereals. B6 is found primarily in animal sources like poultry, pork, beef and seafood, and in smaller amounts in legumes, such as black beans, leafy green vegetables, nuts, and whole grains.”5

“Vitamin D receptors are found throughout the brain and especially in the hippocampus, and low Vitamin D levels have been linked to poor memory and cognitive function. Vitamin D also aids in the growth of new neurons and neurotransmitter synthesis.”5 Remember that Vitamin D is fat soluble, which means that you cannot absorb it if you don’t eat it with fat. Hence, if you’re “getting” your Vitamin D from fat-free milk or fat-free yogurt, you may not be getting it at all. You don’t, however, need to get all your Vitamin D from food: Your body will produce Vitamin D naturally when your skin is exposed to sunlight.

You’ve probably heard about so-called “superfoods” that are especially beneficial for your body or brain. This is a marketing term that simply refers to foods – many already mentioned here – that are nutrient-dense or otherwise very healthy to eat. You don’t need to worry about whether or not the foods you’re eating are “super,” though. You just need to eat well. Are chia seeds, kale, and blueberries healthy? Yeah. Do they have magic powers? Can they make up for an otherwise unhealthy diet? No.

Water matters too because dehydrated brains don’t function as well.15 However, you probably don’t need to drink eight glasses of water a day. That’s a myth. Just drink water when you’re thirsty.16

Can You Eat Your Way to an A?

Eating well is vitally important for brain health and, in turn, academic success, but let’s not see it as a cure-all. This is one of several fundamentals that help prepare a student’s brain for school. And preparation alone does not guarantee success. You still have to play the game of school, engage the content with curiosity, and learn it deeply by doing more than what is asked of you. And you can still get A’s without eating well, but you’d be making school harder than it needs to be.

Your brain is your #1 asset. Feed it well.

10 “The truth about fats: the good, the bad, and the in-between.” Harvard Health Publishing. Harvard Medical School. August 13, 2018.

13 Asprey, Dave. The Bulletproof Diet: Lose up to a Pound a Day, Reclaim Energy and Focus, Upgrade Your Life. Rodale Books, 2014.

16 “Myth of 8 Glasses of Water a Day.” University of Michigan Health System.

Click here to read the latest from the College Board on 2021 AP Tests.

Click here to watch a short video summarizing important information about the online version of the AP Tests.