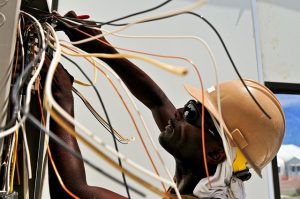 Wait, what the heck is myelin?

Well, neurons are grey, so brain tissue is often called “grey matter.” But the brain also contains “white matter,” and that’s the myelin.1

Made of a mix of fat and protein, myelin acts as insulation for the nerve fibers for the internal connections of the brain.2 This insulation makes the communications between neurons far more efficient.2 Unmyelinated nerve fibers have to be much larger and cost thousands of times as much energy.2 “If nerves were not myelinated and equivalent conduction velocities were maintained, the human spinal cord would need to be as large as a good-sized tree trunk. Myelin, then, facilitates conduction while conserving space and energy.”2

Myelination isn’t a black and white trait. Nerve fibers can have different amounts of myelin insulation based on how much they’ve been used,3 and that’s the point of this article. When we practice skills we have already learned or when we rehearse and recall information we already know, we’re actively thickening the myelin that insulates the neural connections associated with that knowledge. As a result, we can perform the skills more easily next time, and we can recall the knowledge more readily.

The Pursuit of Mastery

“Tennis players, singers, and painters don’t seem to have much in common but they all get better by gradually improving timing and speed and accuracy, by honing neural circuitry, … by growing more myelin.” –Daniel Coyle3

Daniel Coyle is the author of The Talent Code,

which is one of the slew of books that came out in the last 20 years detailing how hard work rather than innate ability is the source of expert performance. (You’re probably familiar with the “10,000 hours” rule discussed in Malcolm Gladwell’s Outliers

.) Coyle’s book is particularly interesting because it looks at the neuroscience of mastery. I’ve often written about walking the mastery path from beginner to expert. Coyle explains what the process looks like inside the brain:

“The talent code is built on a revolutionary scientific discovery involving a neural insulator called myelin, which some neurologists now consider to be the holy grail of acquiring skill. Here’s why. Every human skill, whether it’s playing baseball or playing Bach, is created by chains of nerve fibers carrying a tiny electrical impulse—basically, a signal traveling through a circuit. Myelin’s vital role is to wrap those nerve fibers the same way that rubber insulation wraps a copper wire, making the signal stronger and faster by preventing the electrical impulses from leaking out. When we fire our circuits the right way—when we practice swinging that bat or playing that note—our myelin responds by wrapping layers of insulation around the neural circuit, each new layer adding a bit more skill and speed. The thicker the myelin gets, the better it insulates, and the faster and more accurate our movements and thoughts become.”3

The same rule applies to mastering chemistry, Spanish grammar, or trigonometry. Practice doesn’t make perfect because there’s no such thing as perfect, but practice does increase processing speed and reduce errors.

Myelin is a key player in the saga of neuroplasticity and neurogenesis. When we learn something new, and new neural connections are formed, we have to practice with our new knowledge in order to strengthen those connections. One of the ways they get stronger is by being wrapped in myelin.

You know I love to say that the brain is like a bunch of muscles, so I was quite pleased to read Coyle describe this neat parallel between brain training and muscle growth:

“On one level, the study of myelin sounds like an exotic new neuroscience. But on another level, myelin is similar to another evolution-built mechanism you use every day: muscles. If you use your muscles a certain way—by trying hard to lift things you can barely lift—those muscles will respond by getting stronger. If you fire your skill circuits the right way—by trying hard to do things you can barely do, in deep practice—then your skill circuits will respond by getting faster and more fluent.”3

Coyle also points out that the real work of mastery is about pushing your limits, learning from mistakes and failures, and trying again:

“Deep practice is built on a paradox: struggling in certain targeted ways—operating at the edges of your ability, where you make mistakes—makes you smarter. Or to put it a slightly different way, experiences where you’re forced to slow down, make errors, and correct them—as you would if you were walking up an ice-covered hill, slipping and stumbling as you go—end up making you swift and graceful without you realizing it.”3

And this sort of practice is most painful when you’re a beginner. That’s when you’re most tempted to give up. But that’s also the most critical time. And there’s no getting around it; sometimes learning hurts. I know you have it in you to persist through this phase. If you didn’t, you would have never learned to walk.

“Long story short: a few years ago a group of American and Norwegian researchers did a study to see what made babies improve at walking. They discovered that the key factor wasn’t height or weight or age or brain development or any other innate trait but rather (surprise!) the amount of time they spent firing their circuits, trying to walk. However well this finding might support our thesis, its real use is to paint a vivid picture of what deep practice feels like. It’s the feeling, in short, of being a staggering baby, of intensely, clumsily lurching toward a goal and toppling over. It’s a wobbly, discomfiting sensation that any sensible person would instinctively seek to avoid. Yet the longer the babies remained in that state—the more willing they were to endure it, and to permit themselves to fail—the more myelin they built, and the more skill they earned. The staggering babies embody the deepest truth about deep practice: to get good, it’s helpful to be willing, even enthusiastic, about being bad. Baby steps are the royal road to skill.” –Daniel Coyle3

This is for everyone.

Our culture teaches us to worship the “naturals” – the people with innate talent. But talent is something you make for yourself by doing the kind of practice that changes your brain. “Myelin doesn’t care who you are. It only cares about what you do.”3 If you want to be great at something, you’ll need a deep and persistent dedication.

“Consider Michelangelo. From ages six to ten he lived with a stonecutter and his family, learning how to handle a hammer and chisel before he could even write. After a brief, unhappy attempt at schooling, he apprenticed to the great Ghirlandaio. He worked on blockbuster commissions, sketching, copying, and preparing frescoes in one of Florence’s largest churches. He was then taught by master sculptor Bertoldo and tutored by other luminaries at the home of Lorenzo de’ Medici, where Michelangelo lived until he was seventeen. He was a promising but little-known artist until he produced the Pietà at age twenty-four. People called the Pietà pure genius, but its creator begged to differ. ‘If people knew how hard I had to work to gain my mastery,’ Michelangelo said, ‘it would not seem so wonderful at all.’”3

But before we lose ourselves to lofty dreams of painting the Sistine Chapel, let’s bring this concept back down to earth. Most of us, in most of the things we do, are striving for decent, not world class. Most students aren’t aiming to be the world’s leading expert on the quadratic formula – they just want to do well on this month’s exam and remember it for the final. For these mortal goals, the basic principle still applies, but the process gets to be much more abbreviated.

We just need to remember that the mastery path is a muddy slope. We need to put in the essential spaced repetition early on, and then revisit the concepts occasionally to prevent forgetting. In other words, we need to wrap our neural connections in myelin, so they’ll stick around.

1 “White matter of the brain.” U.S. National Library of Medicine.