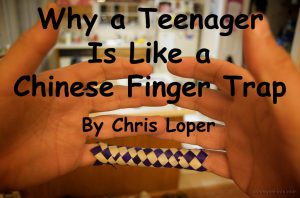 A teenager is like a Chinese finger trap. When you do the intuitive thing – pulling them in the direction you want them to go – they only resist more.

How many parents of disorganized teenagers have told them to “Use a planner!” or “Organize your binder!” only to see the planner remain empty and the binder slowly succumb to the second law of thermodynamics? 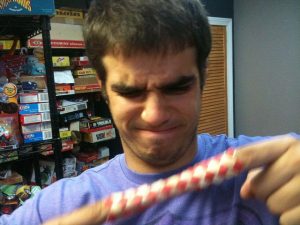 Are you saying I should use reverse psychology?

No. This only works sometimes, and only with certain personalities. I wouldn’t count on it as a reliable strategy. Most teenagers will quickly pick up on it and use it against you.

Why Parenting Teens is so Hard

Most teenagers seem wired to reject the advice their parents give them. Something about going through puberty changes their brains, increasing stubbornness and decreasing obedience. This is not without reason. Nearly every parent of a teenager experiences this phenomenon because it is deeply ingrained in human nature. And like all parts of our evolved psychology, it exists for a reason: When teenagers push back against the status quo and go their own way, they sometimes invent better ways of doing things, driving progress.

Parents understandably find this difficult to comprehend because young children are much more inclined to do what their parents say. This, too, comes from human nature. Very young children are both very ignorant of the world and very vulnerable to danger, and their parents are the ones keeping them safe. Heeding the advice of your parents when, as a child, you’re told to “Look both ways before you cross the road,” is akin to a hunter-gather child being told, “Don’t go near the river because it has crocodiles.” Either way, the child should listen, and they generally do. 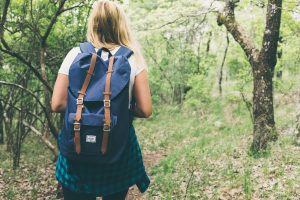 But as children grow into teenagers, they naturally assert their independence more and more, and in turn, listen less and less. This is because they’ve learned enough about the world to have a rudimentary sense of what’s safe and what’s not. They are developing their own values, which drive their own goals, that may or may not align with those of their parents. And in order for teenagers to grow into full-fledged adults, they need to steadily gain more and more independence.

They’re not yet responsible enough for you to fully relinquish control, but they do need to be granted more freedom. Conflict typically arises when parents assert too much control over their teenagers, or when teenagers, eager to enjoy their freedom, overextend themselves and get into trouble. It is a delicate balancing act, one that no one gets perfectly right. 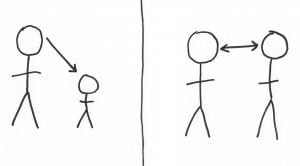 Few things are harder for a parent to watch than their own teenager making terrible choices. But clamping down too hard will breed resentment and rebellion, and any advice you give would be unwanted advice, which is always rejected. The best things I can offer are the principle of leading by example, rather than telling them what to do, and the framework of authoritative parenting, which has been shown to produce the best long-term outcomes.

Every parent of a teenager, though, has actually been navigating this balancing act for years. When your toddler was running around the playground with reckless abandon, did you stop him? Or did you let him run, and inevitably fall and skin his knees? He’d learn more from skinning his knees, just as a teenager will learn more from getting into a bit of trouble and facing the consequences.

Parents have to give their teenagers a chance to screw up because the pain of failure is what motivates good choices in the future. No matter how wise you are, they probably won’t listen to you because they feel compelled to test things out for themselves. They may wind up doing exactly what you told them to do, but only after suffering the consequences of doing the opposite.

So if you’ve ever wondered why your teenager doesn’t listen to your smart, well-meaning advice, well, the reason is, a teenager is like a Chinese finger trap.