Note: This article uses the words “smart” and “stupid,” but I was actually quite reluctant to use them. I’ve chosen to use these words here in order to articulate the thoughts that students have when they’re hesitant to ask questions. Please note that these words reflect a serious problem with the way we think about human intelligence and scholastic ability. I will briefly argue against the everyday connotation of these words in the middle of the article. Please read about the growth mindset and independent self-esteem to gain further clarity.

The main reason why that’s good advice is also obvious: If you don’t understand something, your teacher is the best and most immediate resource you can use to get help. What’s not so obvious is all the other reasons–beyond getting clarification from your teacher–why asking questions is helpful, but we’ll get to those reasons in a moment.

First, I just want to say that it boggles my mind how many students walk out of classrooms confused, with questions in their heads, having never bothered to raise their hand and ask for help. This is one of the most basic forms of self-advocacy that separates successful students from struggling students. Your teachers will assume you understand what’s being taught unless you speak up and indicate otherwise.

Asking questions is one of the simplest and most powerful ways to become an active agent in your own education. Although the answer to your question will come from someone else, the act of asking puts you in charge of your own learning.

Some students don’t ask questions because it doesn’t even occur to them that they could ask, but most of the time students don’t ask questions because they’re self-conscious. Many people, understandably, have a fear of looking stupid, and the social milieu of school can be quite harsh. Asking a question in class means publicly admitting that you don’t know something. It can be embarrassing. It makes you vulnerable.

And that brings us to the first non-obvious benefit of asking questions:

Raising your hand to ask a question in class is an inherently brave thing to do, and bravery isn’t a trait that you either have or don’t have; it falls on a spectrum. Bravery is a skill you develop through practice. In order to become comfortable taking social risks–something everyone needs to be able to do–you have to practice.

Because of self-perception, whenever you take a social risk, your brain observes you taking that risk and decides that you must be at least somewhat confident. Otherwise, you wouldn’t be doing it. Whenever you ask a question in class, you not only learn the answer to your question, you also learn that you’re self-assured enough to be vulnerable, which makes it easier to ask questions in the future. In other words, you become a little more confident after each risk you take.

When you ask a question in class, you’re actively showing yourself that you’re not worried about looking stupid. It’s a growth-minded thing to do. By admitting your own ignorance, you’re telling the world–and yourself–that it’s okay to be a work in progress. Not-knowing isn’t the same as not being able to know. Ignorance is not the same as stupidity.

In fact, one of the few things students do that can accurately be described as “stupid” is not asking questions. Other legitimately “stupid” behaviors are limited to a narrow range of actions, such as choosing to ride a bike without a helmet, neglecting to wear a seat-belt, and driving under the influence. Almost everything that people construe as “stupid” really isn’t. It is completely and utterly normal to misunderstand instructions, make mistakes, or have questions about what you’re learning.

“Tis better to be thought a fool and remain silent than to open one’s mouth and remove all doubt.”

In school, the most foolish thing one can do is remain silent. In the end, you’ll probably be much more embarrassed about failing a test or having to go to summer school to retake a class than you would be asking questions in class.

Being “smart” is less about possessing a high IQ or a head full of knowledge, and more about exercising your mental muscles, using effective strategies, and giving yourself permission to be human.

Asking questions in class is like saying to yourself, “It’s not my fault that I don’t get this right now, but it will be my fault if I don’t get it eventually.”

You can also ask your questions before or after class to avoid the social risk and still get the answers you need. At the other end of the spectrum, you can ask questions you already know the answer to as a way to practice putting yourself out there. Some students even ask questions just to pause the teacher and give themselves time to get caught up on notes.

Sadly, to many students, the prospect of asking questions triggers anxiety. Questions, it seems, can represent a host of negative emotions: 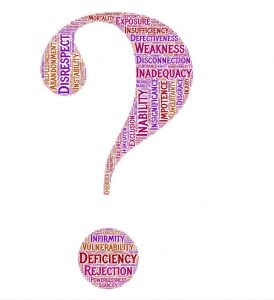 And they do something else, too. They demonstrate to your own mind something very important:

If you have a question, you’re almost certainly not alone. The odds of you being the only student in a class of 30 who doesn’t understand a particular part of what’s being taught are very small. By asking your question, you’ll not only be helping yourself, you’ll also be helping all those other students who were struggling to understand the lesson but who were too afraid to speak up.

Because you’ll be leading by example, asking a question makes it more likely that other students will do the same in the future. You’ll benefit from the questions they ask; they might ask something you haven’t thought of. You’ll benefit even if they ask questions you already know the answers to because hearing the teacher explain the ideas again gives you another exposure, and repetition forms memories.

At the same time, you’ll also be helping your teacher. Teachers need feedback about how effectively they’re presenting information. Students often have questions because their teachers have given inadequate explanations or insufficient examples. By asking questions, students help teachers see the shortcomings in their own lessons and thereby improve. This benefits everyone for years to come.

If you’ve never been confident enough to ask questions in class, or if you’ve never thought it was worthwhile, I hope you’ll start asking now. The more you do, the more you’ll feel like a confident, engaged student who is eager to learn.