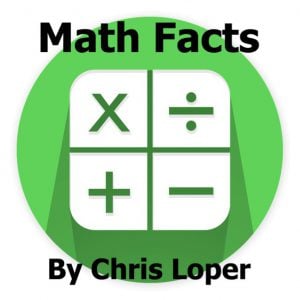 These are math facts. They are simple, mathematical truths that all students are made to learn. At first glance, math facts are just like everything else students learn in school, but there is a difference between learning your math facts and, say, learning to write an essay. Math facts are meant to be memorized.

Now, you don’t have to memorize them. You can, through very slow methods, calculate the answers to each of the problems I just listed. But as you move up in the world of math, you’ll be increasingly expected to have them memorized, and for good reason. If you don’t memorize your math facts, you’ll spend your entire math career weighed down by excess cognitive load.

Solving higher-level math problems takes brainpower. Because the brain is like a bunch of muscles, your brainpower at any given moment is limited. Any mental energy you spend calculating a non-memorized math fact is energy that is not available for the more difficult math you’re trying to do. If, instead, you have your math facts deeply memorized, then you’ll expend no brainpower whatsoever to access them, leaving plenty leftover to think about the problem at hand.

Automaticity is the goal. When your math facts are deeply memorized, you see questions like 7×8 and react instinctively, instantly, and without thought. When it comes to knowing your math facts, understanding is not enough; you have to master them. Walk the mastery path. It’s worth it.

Remember, math is an upside-down pyramid. The simple topics at the bottom form a narrow foundation that supports a top-heavy structure containing all of the upper-level math content:

Because math facts are at the bottom of this inverted pyramid, you can’t afford to have weakness there. Start at the bottom and work your way up.

It’s never too late to memorize your math facts. Even if you’re taking AP Calculus or preparing for the SAT, you need your math facts. Both of those exams contain no-calculator sections, so you’ll be penalized if you don’t know them.

So how do you memorize your math facts?

The best method is to simply work with them on a regular basis. Devote two minutes each day to memorizing your math facts. Even though it would be more total time, doing 20 minutes once a week would be less effective because it would fail to utilize spaced repetition. You can work with your math facts on paper, with flashcards, on Khan Academy, or anywhere, anytime, using mental recall.

One neat trick is to stick a set of flashcards in between the salt and pepper shakers on your dinner table. At the beginning of one of your meals each day, do a two-minute drill with the flashcards. This method helps bring structure and routine into the effort, which is critical because you want the drills to become an automatic habit.

Self-development expert James Clear calls this method of attaching a new habit to a preexisting one “habit stacking,” and argues that it increases the likelihood of having the behavior stick.1 Other examples of habit stacking include flossing immediately after brushing your teeth, meditating right after you have your morning coffee, and writing in a gratitude journal as soon as you go to bed.

I would also like to point out that two minutes is just 0.2% of your waking hours. It’s hard to say you don’t have time for something that takes only two minutes. And I’m certain that you’ll wind up saving a great deal more time on your math homework. Memorizing your math facts is an investment that can pay enormous dividends.

Once you reach middle school, there are so many other concerns that memorizing your math facts will probably never seem urgent. Therefore, you’ll easily find justifications for putting it off or never doing it at all. Just please recognize that you could choose to memorize your math facts, and if you did, you’d be doing yourself a huge favor.

1 Clear, James. “Habit Stacking: How to Build New Habits by Taking Advantage of Old Ones.”