Last summer I received a jigsaw puzzle as a gift. I love puzzles, and I’ve done enough puzzles to become pretty good at them. This particular puzzle, however, almost defeated me.

The picture for this puzzle was Vincent van Gogh’s Starry Night: 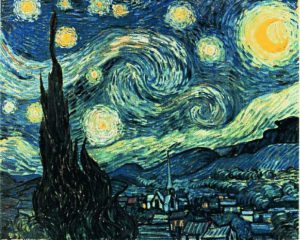 The painting had been transformed into a photomosaic puzzle. A photomosaic, in case you don’t know, is made of hundreds of tiny photographs that are arranged to form a pixelated version of the original image. For the Starry Night puzzle, all of the images were of space exploration. As is typical with a photomosaic, some of the images appeared 2 or 3 times in different places.

While photomosaic puzzles do tend to be more challenging than standard jigsaw puzzles, this one was several orders of magnitude more difficult than those I’d done previously. Starry Night–at least in the version they reproduced–has only three colors: blue, yellowish-white, and black. For the most part, these colors are evenly distributed throughout the puzzle. Furthermore, many of the space-exploration pictures were very similar to each other. 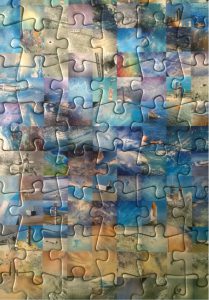 At first glance, I knew the puzzle would be harder than most I had done in the past, but I really had no idea what I was getting into.

Normally, I finish a 500 piece puzzle in less than a week, just by casually working on it in my spare time. However, after two weeks of dedicated effort, I had completed less than 10% of the Starry Night photomosaic. I was recovering from foot surgery, so I had plenty of time on my hands, but I couldn’t seem to make progress. In a one-hour puzzling session I might only connect five pieces. None of my usual strategies worked for this puzzle, and I was at a loss about what to do. For the first time in my puzzling career, I felt like giving up.

Luckily, as I entered the third week of my struggle, I started listening to an audiobook of Carol Dweck’s Mindset: The New Psychology of Success

. Dweck, a research professor at Stanford University, says that success comes from having a “growth mindset,” which means believing that your intelligence and all of your other abilities can be grown through hard work, persistence, and the use of effective strategies.1 She contrasts this against having a “fixed mindset,” which means believing that your level of success depends on your innate, unchangeable capabilities.1

When we run into challenges, like my puzzle, we really need a growth mindset. When people with a growth mindset encounter something difficult, they see it as a sign that they need to work harder and find new strategies.1 They see a challenge as an opportunity for growth. On the other hand, people with a fixed mindset see the same difficulty as a sign that they’re simply not smart enough or talented enough to handle the challenge.1

I decided that this puzzle would be my growth-mindset training. I would put the growth mindset into action and use it to overcome the challenge that this puzzle presented. I convinced myself that the puzzle could be completed and that I was capable of figuring it out. I buckled down and worked harder.

I tried a variety of novel puzzle strategies that had never occurred to me before. Some techniques worked and some didn’t, but each little experiment taught me something. Eventually, I hit on a few strategies that, when applied diligently, allowed me to make significant progress.

After a few weeks of applying my new puzzling skills, I was surprised to see that I was well more than half done. With the wind now at my back, I charged on, and a week later, I was done: 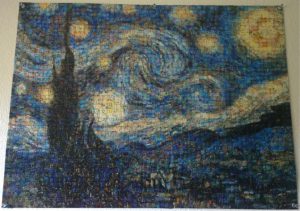 Aside from seeing the power of a growth mindset in action, this puzzle forced me to confront my resistance to using tools. The best tool a jig-saw-puzzle doer has is the image on the box. As a matter of pride, I normally don’t look at the image on the box while I do the puzzle, and if I do, I give it only a casual glance. The van Gogh photomosaic was so difficult that I had to let go of my pride and use the image on the box. When I first gave in and started looking at the picture, I was only using it as a basic reference, but that proved insufficient. It eventually became a critical part of my strategy to use the image in order to carefully map where particular pieces belonged.

Initially, my stubborn pride got in the way of my success, which parallels a common way that students make school tougher than it is. Many students believe they can manage their schoolwork without keeping track of assignments and test dates in a planner. At the next level, students will reluctantly use a planner, but only halfheartedly engage it. Just as I learned that casually glancing at the image on the box wasn’t effective enough, students often find they get little benefit from using their planner in this way. Careful, consistent use of the tool produces the best results.

This puzzle was also an exercise in patience. Because I normally complete puzzles very quickly, I expected that I would be finished in a week or two. But that wasn’t to be with this puzzle. I had to be patient. It was only when I let go of my expectation of finishing the puzzle quickly that I could fully concentrate on the process of making progress.

Many students struggle with a similar challenge. It’s common to have an easy time in math until the questions start to become time-consuming, multi-step problems. Being accustomed to getting answers quickly and easily, many students mistakenly think there’s something wrong with them. Suddenly, their old strategies don’t work, they can no longer complete the problems in their head, and they’re making more errors.

To succeed at high-level math, students have to record all the information from the question on paper, carefully write out each step of the problem, and patiently work through the process until they arrive at an answer. And just as I felt like giving up after two weeks of work on the puzzle, many students feel like giving up when they reach this point. Those who succeed learn to abandon their old assumptions, adopt new strategies, and develop greater patience.

My initial frustration with the puzzle resulted from focusing too much on the end result – completing the puzzle–and not enough on the process–connecting pieces. This is a classic mistake that people make in many areas of their lives. It’s a counterintuitive truth that focusing less on our goals and more on our processes helps us achieve our goals. A basketball player who is too focused on winning the game will lose focus on making the next shot. Meanwhile, a player who ignores the scoreboard will have more mental energy to put towards playing well.

Students often focus so much on their grades that they stop caring about learning, and, ironically, their grades suffer. The writer who constantly dreams of his perfect, completed book will never take the risk of starting to write because he fears that the words he puts on the page might not be perfect. Focusing on the end-result rather than the process of getting there is like running an obstacle course with your gaze fixed on the finish line–you’ll surely trip and fall.

One reason I persisted through the Starry Night challenge was that I knew the science of neuroplasticity and neurogenesis: The brain can rewire and grow in order to adapt and improve. Every time you learn anything your brain grows, and I’m quite sure that my brain grew quite a bit during my struggle with this puzzle. Research shows that teaching children about the dynamic, ever-changing nature of their brain makes them more likely to keep trying when they face difficulties.1 In other words, knowing about neuroplasticity and neurogenesis makes people more likely to have a growth mindset.

Finishing this puzzle was a far greater triumph than completing any of the other puzzles I’d done in my life. While a jigsaw puzzle is plainly a trivial thing to do, the cognitive growth I experienced during this challenge was far from trivial. The completed puzzle now hangs on my wall as a testament to my growth mindset. It serves as a steady reminder that persistence pays off.