Disclaimer: This is brain-improvement advice, not health advice. None of this advice is a substitute for professional help. Please consult your doctor before making any changes to your diet or exercise habits, and before taking any supplements.

For most of the 20th century it was widely believed that brain cells could not regenerate. Toward the end of the century, evidence began to pile up in refutation of that belief. We now know that brain cells do regenerate, in humans and other animals. Our brains contain an ever-replenishing supply of stem cells that can become new brain cells. In other words, our brains contain the seeds with which to grow new neurons. This process, known as neurogenesis, happens throughout our lives.1 Pretty cool, right? Better still, there are simple things we can do to stimulate neurogenesis.

So what can you do to help your brain grow more neurons?

First and foremost is exercise. Physical exercise promotes neurogenesis,1 which is part of the reason exercise has so many cognitive benefits. Studies have shown that exercise increases mental endurance, memory, intelligence,5 creativity,6 and happiness.7 It also prevents and alleviates Alzheimer’s disease and other forms of age-related brain decline.5,8,1

Eating a healthy diet is strongly associated with good general brain health and stronger brain function. In addition, there are some specific foods or supplements that can increase neurogenesis.

Omega-3 DHA is one. This particular type of Omega-3 fatty acid is found in a variety of foods, but by far the strongest sources are wild, cold-water fish and marine algae. A fish oil supplement or a marine algae supplement can be an easy way to get more DHA. Studies have shown that increasing DHA in the diet improves learning and memory,1 and can have other positive effects on the brain, as well.10

Curcumin, which is found in the root-spice turmeric, has been shown to promote neurogenesis,1 and provide a number of other health and cognitive benefits.11 For those unfamiliar with turmeric, it is the spice that gives yellow curry its color: 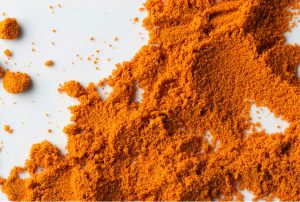 The brain is a lot like a group of muscles: Using them makes them stronger, and focusing your exercise on one particular muscle causes it to grow. Someone who frequently uses a particular part of his brain will literally enlarge that part of his brain. Neuroscientists like to say “Use it or lose it,” with regard to your knowledge and abilities, meaning that without practice and repetition, you’ll forget what you’ve learned.8,5 Today we’ll add to that, and say “Use it and grow it.” Practice and repetition not only grow your abilities, but your actual brain as well.

The most famous example of increased grey matter comes from London cab drivers. London’s streets are a complicated maze that have no coherent logic. Learning to navigate them takes years, and if you’ve managed to do so, it is said that you have “The Knowledge.” Brain scans reveal that the hippocampus of anyone with The Knowledge is enlarged. Before-and-after scans show that novice cab drivers grow larger hippocampi during their acquisition of The Knowledge. This happens because one of the hippocampus’ jobs is spatial memory.12

This localized brain growth isn’t always for the best. Individuals who experience a lot of anxiety and stress tend to have larger amygdalae. This is especially true for children with anxiety.13 The amygdala is like the brain’s alarm system: It responds to threats, both real and imagined. Constantly activating this threat-center in the brain causes it to grow, causing it to become activated more easily, in a dreadful feedback loop.

Mindfulness meditation, on the other hand, has been shown to decrease activity and cell-density in the amygdala.14 In other words, you can deliberately reduce your anxiety with regular meditation. This must be part of the reason why meditation increases emotional well-being.7 Meditators also show increased grey matter in their hippocampi, helping explain why meditation has been shown to improve learning and memory. Furthermore, meditation increases the thickness of the cortex15–the wrinkled outer layer of the brain that is responsible for complex thought and focused attention.9 The longer someone has practiced meditation, the thicker their cortex.15

Stanford’s Dr. Carol Dweck has, through her research, drawn an important distinction between having a “fixed mindset” for intelligence and a “growth mindset.” The fixed mindset is the belief that abilities are genetic and unchanging, while the growth mindset is the belief that intelligence can be improved and talent can be developed through hard work.

The growth mindset is not only the correct mindset to have, factually, but it’s also the better mindset to have: Having a growth mindset leads to effort, persistence, and success.16 It’s more common to point out that neuroplasticity – the brain’s ability to rewire itself – is the reason why the growth mindset is correct, but we can also point to neurogenesis. You can increase the amount of brain cells you have by exercising, eating well, and exerting mental effort. You can literally grow your mind.

1 Perlmutter, David, MD. “Neurogenesis: How to Change Your Brain.” The Huffington Post. November 2, 2010.

8 Doidge, Norman. The Brain That Changes Itself. Penguin Books, 2006.

11 “Benefits of Turmeric.” How Stuff Works.