Feedback loops show up all over the place, from nature to history to social psychology, and understanding these loops is important. Learning the essentials of feedback loops will make it a lot easier to help your children succeed. You can also use them to help yourself, and, as we’ll see, they help make sense of a wide variety of things in our world. 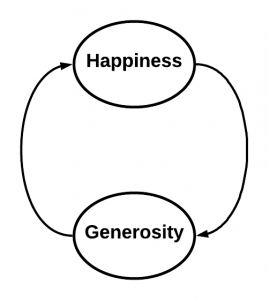 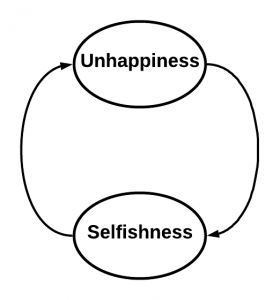 This simple example can give us a lot of insight into the workings of feedback loops.

Loops tend to develop momentum. The elements of the system keep reinforcing one another, and the system becomes self-perpetuating. This means that feedback loops are hard to stop. That would be a good thing, in the case of the happy and generous individual, but a bad thing in the other case.

We’ve all experienced feedback loop momentum in our lives. When I’m having a good day, I smile at people, I do more favors for people, I notice the beauty of our world, I feel lucky to be alive, and little things that go wrong don’t bother me. But when I’m having a bad day, I find it difficult to smile, I rarely do people favors, I ignore beautiful things, I feel sorry for myself, and every little thing that goes wrong upsets me. Good days and bad days have momentum, because they are both products of several overlapping feedback loops.

One of those loops is the generosity/happiness loop. Another is the emotional contagion loop. Emotions are contagious, so smiling at other people makes them feel happier, increasing the likelihood that they’ll smile at you. When they smile at you, your mirror neurons – brain cells that automatically mimic the emotions you see in others – activate and make you feel happier, causing you to smile more. Unfortunately, negative emotions are also contagious.1 People who look upset often make us feel upset, causing us to appear upset and unwittingly spread negative emotions to others.

In case the idea of feedback loops isn’t clear, let’s consider a couple of different examples. While these examples have nothing to do with education, they’ll help you wrap your mind around this concept. The first example comes from nature: the evolution of the peacock’s tail.

Female peacocks don’t have grandiose tails – they’re rather plain birds. But they love males who have huge, ornate tails. The bigger, fancier, and more symmetrical, the better. Because of the females’ preference for grandiose tails, males who have such tails have more offspring. This has two effects: One is that the next generation of males will have bigger tails; And two is that the females will evolve an even stronger preference for fancy tails, because they prefer to mate with males who are good at passing their genes down. Biologists refer to this feedback loop as sexual selection,and it explains how something this ridiculous could evolve.2

For our second example, let’s consider cyclical violence. In several places around the world, different groups of people have been fighting one another for years, decades, or even centuries. These seemingly intractable conflicts are fueled by a revenge-violence feedback loop. For simplicity’s sake, we’ll call the two sides in any of these conflicts Group A and Group B. If Group A attacks Group B, Group B then feels the need for revenge. So Group B counterattacks, causing Group A to want revenge. So Group A attacks again, provoking even more revenge from Group B, and so on, in a never-ending cycle of violence. This feedback loop helps explain why it’s so difficult to foster peace between groups such as inner-city gangs, Sunnis and Shias, Protestants and Catholics in Ireland, India and Pakistan, and Israel and Palestine. Each of these conflicts has its own unique origins and complications, but there is an underlying pattern to all of them. Likewise, there is a common intervention that can end the violence: a mutual commitment to ceasefire.

Once a loop is occurring it can be very difficult to stop or reverse. Once we fall into a behavioral loop, it’s easy to get stuck, and as we’ve seen, not all feedback loops are places we’d like to be. Worse, when we’re stuck in a downward spiral, it feels like we’re truly trapped. We feel helpless, like nothing we can do would ever change our situation.

But we’re not trapped. We can intervene and change our situation. To do so, we must change one of the elements in the system. Which element should be the target of our intervention? Choose the element of the system that the easiest to change. In our original example, generosity/happiness vs. selfishness/unhappiness, the easiest intervention is to do something generous. If you’re stuck in a cycle of self-centered unhappiness, do something nice for someone. It might take several acts of generosity to reverse the downward spiral. 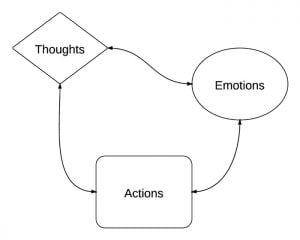 Imagine you’re a student who feels really nervous whenever you have to take an exam – a common problem. A little bit of anxiety makes you alert, but too much hinders your performance. What typically happens if you’re a nervous test-taker is that you’ll feel really nervous, you’ll think negative thoughts (like “I can’t do this”), and you’ll act anxious with your body language. These three things feed off of each other in a self-reinforcing downward spiral. 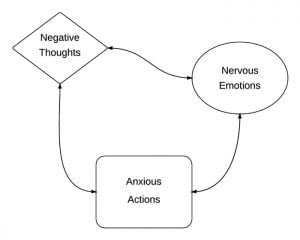 To feel more confident and thereby do better on the exam, you’ve got to intervene by changing one of these three elements. Changing your emotions directly is really hard, so I don’t recommend trying that. Changing your thoughts is somewhat easier, so that’s worth a try. Argue against your negative thoughts with positive, confident thoughts. Tell yourself that yes, you can handle this, and you’ll be more likely to actually handle it. The easiest intervention, however, is an action. We often have little control over our thoughts, and we have even less control over our emotions, but we can almost always control our actions. 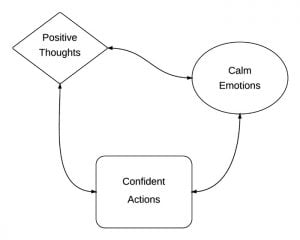 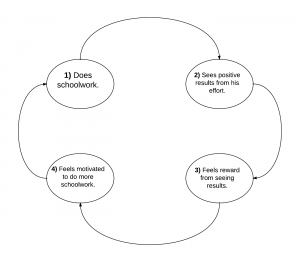 But how can we use this to help an unmotivated student?

If that unmotivated student could be shown the motivation loop, and see how it works, then he would be able to find the path forward, which is to do schoolwork despite not feeling motivated. He would know that emotional reward and motivation follow action. A similar feedback loop is at play when anyone creates their own motivation in order to overcome procrastination.

When you’re unmotivated, it can be really difficult to imagine how you’ll ever be motivated again. Seeing this motivation feedback loop can make it a lot easier to get started.

A similar process plays out in the arena of willpower but on a larger time-scale. Using willpower might drain you in the short-run, but it often kick-starts various willpower virtuous cycles that increase your future willpower. Activities like exercise can thus provide a great return on investment for the willpower you put into them.

Feedback loops will pop up occasionally in future blog posts, so thank you for taking the time to learn about them. I hope you’ve seen how understanding them can be helpful.